A Facebook post with more than 21,000 shares purports to show images of a woman who gave birth to eleven babies. The claim uses two misleading images as evidence — one showing the famous American “Octomom” who gave birth to eight babies in 2009, and the other showing eleven babies born on the same day in India, to different mothers. 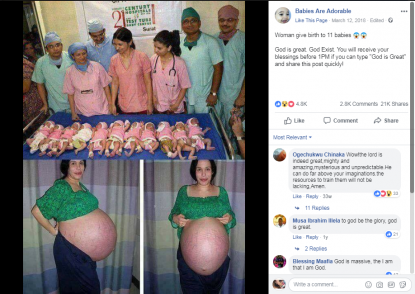 A reverse search of the image showing medical staff, alongside a row of 11 newborns, reveals several articles about a woman giving birth to 11 babies, dating back as far back as 2012.

We looked at the background of the image for further clues. The group are pictured in front of a poster which reads “Test Tube Baby Centre Surat”.

A more specific Google reverse image search of the same photo, with the search term “test tube babies Surat”, returns several articles debunking claims that a woman had given birth to 11 babies in the city of Surat in western India. A screenshot taken on April 11, 2019 of a Google Reverse Image search

In fact, the image was taken after the delivery of 11 babies on November 11, 2011 in Surat at an In Vitro Fertilization (IVF) centre. Thirty women conceived nine months earlier at the same centre. However, 11 of the couples wanted their babies born on the special 11/11/11 date and scheduled operations for the delivery, as reported by the Times of India here.

After the birth, the IVF centre posted the photos on the blog it was running at the time. They have since set up another website, available here.

As for the second image, portraying a heavily pregnant woman from the front and from the side, it shows an American woman named Nadya Suleman, also known as Natalie Suleman. Suleman was  dubbed “Octomom” by the media in 2009 after she gave birth to eight babies, also through IVF treatment. She already had six children when she fell pregnant with the octuplets. 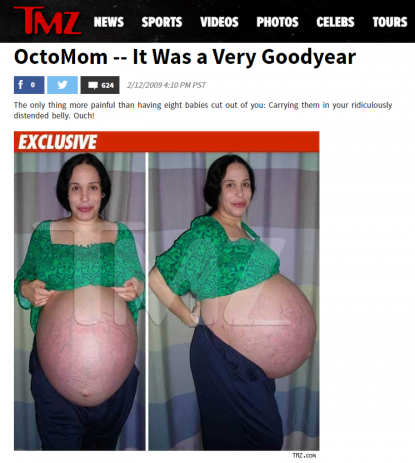 The octuplets celebrated their 10th birthday in January this year.