A photo of a large mansion has been shared hundreds of times in Facebook and Twitter posts that claim it is “Imran Khan’s house in Bani Gala”. The claim is false; the image does not show the Pakistani prime minister’s private residence in Bani Gala, a suburb of Islamabad; it shows an estate in the US which belonged to late shoe designer Vince Camuto.

Multiple posts, for example this one published to Facebook on May 28, 2019, and shared more than 100 times since, contains an image showing a huge mansion labelled in English as “Imran Khan's house in Bani Gala”.

Bani Gala is a neighbourhood in the Pakistani capital Islamabad, where Prime Minister Imran Khan’s private residence is situated. 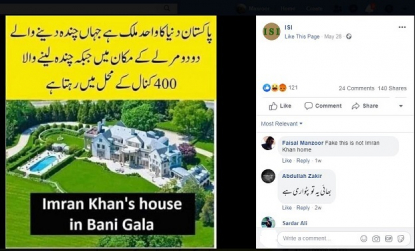 The image also includes text in Urdu that translates as: “Pakistan is the only country in the world where those who donate money live in a 2 marla house, while the one who takes donations lives in 400 kanal palace.”

“The one who takes donations” is a reference to Khan, who used charitable donations to build two cancer hospitals in the Pakistani cities of Lahore and Peshawar in memory of his mother, who died of cancer.

Here is the website of the Imran Khan Cancer Appeal and here is a report in Pakistani newspaper The News International, dated May 12, 2019, about a fundraising drive to provide free treatment to patients.

This Facebook post also contains the house photo without Urdu text on top with a caption which reads: “Imran Khan House - Bani Gala - worth 5 billion.” The same photo and claim have also been posted on Twitter, for example in this post retweeted more than 400 times.

The house in the image, however, is not located in Pakistan.

A reverse image search on Google found that the property is located in The Hamptons, a wealthy part of Long Island in the US state of New York, and belonged to late shoe designer Vince Camuto. "The late shoe designer Vince Camuto's Water Mill, N.Y., estate is hitting the market at $72 million," says the description of the photo in the Forbes report.

The photo is dated 2013 and credited to "AERIAL AESTHETICS &/OR BRUNO R. SCHRECK".

Here is another report on the property published by CNBC on May 31, 2017, which also contains video and photos that match the image in the misleading Facebook posts.

Below is a screenshot comparison of photos of the mansion in Forbes photo gallery (L) and in the misleading Facebook post (R): Below is a Google Earth screenshot of Khan’s villa, showing significantly less landscaping and a pool which is located much farther away from the house than on the Hamptons estate: 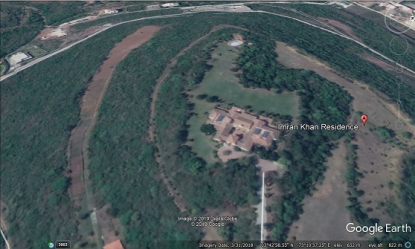 Shown below is this AFP file photo of Khan’s house dated January 8, 2015, a handout image distributed to press by his Pakistan Tehreek-e-Insaf (PTI) party.

It shows Khan and his now ex-wife Reham Khan after their wedding in 2015. Enough of the house can be seen to show it is a different building than the one in the misleading posts: 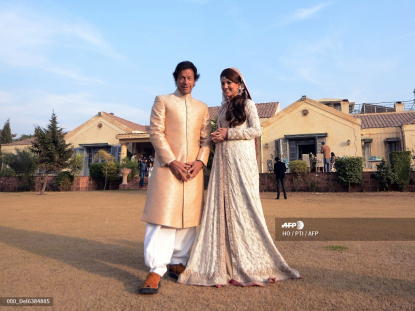 The caption of the AFP photograph says: “In this handout photograph released by the Pakistan Tehreek Insaf (PTI) party on January 8, 2015, Pakistani opposition leader Imran Khan (L) and new wife Reham Khan pose for a photograph during their wedding ceremony at his house in Islamabad.