No, this is not a genuine photo of Pakistani cricket players being frisked ahead of a match against India

An image purporting to show Pakistani cricket players undergoing airport security-like checks has been shared in multiple Facebook posts that claim the Pakistani players are being "frisked" ahead of a match against India. The claim is false; the image originated as satire; part of it has been doctored from a 2018 AFP photograph.

The doctored image was published here in a Facebook post on June 16, 2019. It has been shared more than 350 times.

India and Pakistan played each other on June 16 as part of the ongoing Cricket World Cup at Old Trafford, England. Here is an AFP report on the match, which India won.

The caption alongside the doctored image in Hindi translates to English as: “This is their capability. All were frisked well to ensure these Pakistanis are not carrying any bomb. There cannot be a bigger defeat than this."

A couple of Facebook users have highlighted in the comment section of the post that the photo is morphed and not real, but a few comments also show that some people thought it was real.

“They face humiliation internationally but don’t learn a lesson even after that,” reads a comment in Hindi by a user named Sunil Kumar.

“This is absolutely right. This country should not be overlooked. They are far ahead in exploding bombs,” reads another comment by Niri Mimi. 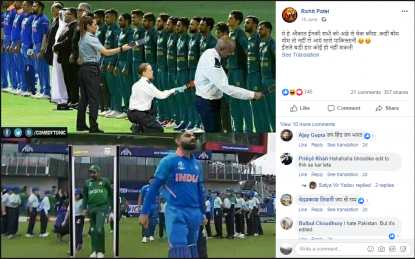 The misleading image has the word "comedytonic" written in white on a black box on its left-hand side.

The claim is false; the image has been doctored from this 2018 AFP photograph.

Below is a screenshot of the original AFP photo: Snapshot of the original AFP photo

Its caption says: “Indian and Pakistan (R) players line up for the national anthem just before the start of the one day international (ODI) Asia Cup cricket match between Pakistan and India at the Dubai International Cricket Stadium in Dubai on September 19, 2018. AFP/ISHARA S. KODIKARA.”

Below is an image comparison screenshots of photos of security personnel used in the morphed image (Top) and the original image marked as 1 and 2 respectively. An analysis of the bottom part of the misleading image found it had been doctored to include a security scanner.

The security scanner has no shadow on the ground and does not fit with the perspective of the image, as highlighted with a red cricle below:

No, this video does not show Hong Kong citizens queuing at Chinese banks to cancel accounts after mass protests

No, this video does not show the arrest of the star of a Filipino TV show critical of the police -- it’s clickbait using footage from an unrelated news report