A video showing Tanzanian President John Pombe Magufuli in a celebratory mood has been viewed more than 200,000 times on social media alongside claims that he was marking the country's eradication of COVID-19. The claim is false: an online search reveals that the clip was filmed in 2016, years before the novel coronavirus pandemic began.

A Facebook post shared the video on May 24, 2020, with the caption: “No masks. No social distancing. No curfews. No lockdown - Tanzania celebrations after defeating corona”. The clip has been viewed more than 200,000 times. 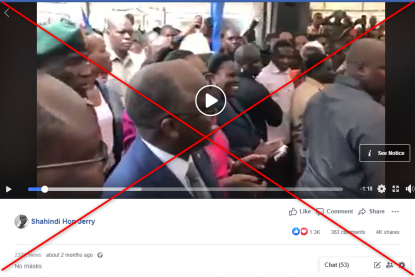 The same video was shared here with an almost identical caption. Since June 12, 2020, it has been viewed more than 4,000 times.

Other posts like these here, here and here shared hundreds of times have used the same footage and claimed that it shows Magufuli playing the drums in church. “No wonder there is no covid 19 in Tanzania,” reads the caption. “This is the same man that declared that he will not shutdown church because Jesus Christ is bigger than coronavirious.”

But the footage predates the outbreak of novel coronavirus. A search on video verification platform WeVerify found older versions of the clip from 2016, 2017  and 2018. A search on YouTube using the keywords “Magufuli playing the drum” also led to the video here and here.

A caption on one of the videos uploaded by EATV, the East Africa 24-hour entertainment television channel, contained details of the event.

“President Magufuli entertains guests at the University of Dar es Salaam after laying the foundation stone for the construction of new hostels, this morning,” reads the Swahili post on EATVs Facebook page, published on October 21, 2016.

AFP Fact Check searched a calendar with Magufuli’s public engagements on the official website of the Tanzanian presidency. It showed that on the day, he attended a ceremony at the University of Dar es Salaam to mark the construction of new hostels.

Screenshots taken on July 13, 2020, showing the calendar of engagements on the presidency's website, left, and the event that took place on October 21, 2016 when the video clip was filmed

The images featured in the government blogpost are the same as the video frames circulating in the misleading Facebook posts.

A screenshot of images as they appear on the Tanzanian presidency website, taken on July 13, 2020.

The new coronavirus is believed to have emerged in the Chinese city of Wuhan in December 2019.

Tanzania recorded its first infection on March 16, 2020, but has not released any data since April 29. By the last count, there were 509 positive cases and 21 deaths, according to the World Health Organization.

While countries across Africa have taken tough measures against the pandemic, Magufuli has downplayed its gravity and is on record encouraging gathering in places of worship, as reported by AFP.

On June 8, 2020, the BBC reported that Magufuli had declared Tanzania free of the virus “thanks to prayer by citizens”.

AFP Fact Check has debunked other claims relating to COVID-19 and Tanzania here.