This video actually shows a 2012 election victory parade in Singapore

A video has been viewed thousands of times on Facebook alongside a claim it shows Singapore’s opposition Workers' Party holding a rally in July 2020 during the COVID-19 pandemic. The claim is false; the video actually shows a by-election victory parade in Singapore in 2012.

The three minute 46-second video shows an open-top truck travelling slowly along a crowded street. A group of people standing in the back of the truck can be seen reaching to shake hands with people surrounding the vehicle. 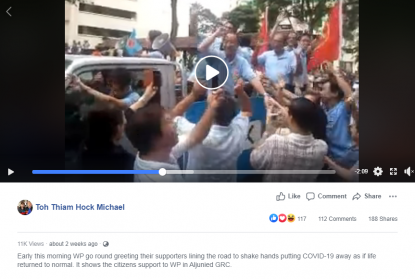 The post’s caption states: “Early this morning WP go round greeting their supporters lining the road to shake hands putting COVID-19 away as if life returned to normal. It shows the citizens support to WP in Aljunied GRC.”

“WP” refers to The Workers' Party, a political party in Singapore and “Aljunied GRC” is Aljunied Group Representation Constituency, a five-member group representation constituency in the north-eastern and eastern region of Singapore.

Singapore went to the polls on July 10, 2020 that saw the ruling People's Action Party retain power, but with a significantly reduced majority, after the opposition Workers' Party picked up 10 seats -- its best ever showing at an election.

At the video's three-minute 30-second and three-minute 32-second marks, a blue placard can be seen on the side of a truck. It reads “Vote Workers’ Party” alongside a photo of a man.

A subsequent keyword and reverse image search found the video shows Png Eng Huat, a member of the opposition Workers' Party who was elected MP after winning the 2012 Hougang by-election. Here is an AFP report about the 2012 vote.

A further keyword search found two videos published here and here on YouTube on May 27, 2012, that appear to have been taken from a similar angle of the same scene.

The YouTube videos show the same spectacled man and placard on the side of the truck.

Below are screenshot comparisons of the video in the misleading post (L) and the 2012 YouTube videos (R), with the identical elements circled in red by AFP:

This Google Maps image of Hougang corresponds with the background seen in the video.

The misleading post was also debunked by Reuters here.