A photo has been shared tens of thousands of times in multiple Facebook posts claiming to show a Pakistani Islamic scholar kneeling before a Christian priest. The claim is false; the photo has been doctored from an image showing the ordination of a priest in Edinburgh, the capital of Scotland, in 2008.

The post’s Urdu-language caption translates to English as: “Does it suit an Islamic scholar to kneel before a Christian priest?” 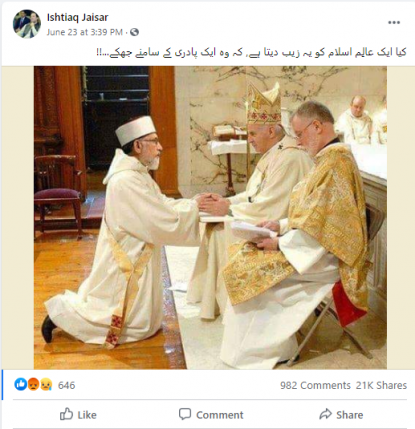 The photo has also been shared with a similar claim on Facebook here, here, here and here.

A reverse image search on Google found a similar photo without Qadri published here on a page titled "The blog of the Dominican student brothers at Blackfriars, Oxford”.

The photo, posted in October 2008, was described to show the ordination of Friar Bruno Clifton in Edinburgh, the capital of Scotland. 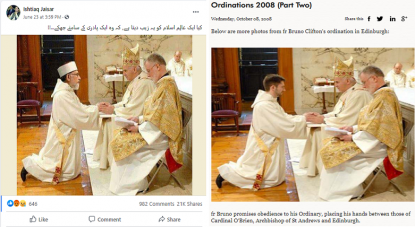 This blog post on the website for Qadri’s religious organisation, Tehreek Minhajul Quran, also debunked the photo in the misleading posts.