A footage has been viewed tens of thousands of times on Facebook, Twitter and YouTube alongside a claim that it shows the king of Thailand summoned Muslim clerics to pray to get rid of Covid-19. The claim is false; the video shows Thai King Maha Vajiralongkorn and Queen Suthida presiding over the annual Koran recitation competition in 2020.

The one-minute, 26-second video was posted on January 4, 2020 here on Facebook and has been viewed more than 2,000 times since. 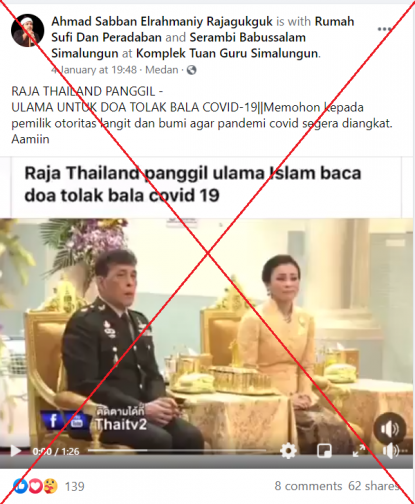 The Indonesian-language post translates to English as: “THE KING OF THAILAND SUMMONS - MUSLIM CLERICS TO PRAY TO GET RID OF COVID-19 || Requesting the authority of heaven and earth so that the Covid pandemic will be lifted immediately. Amen”.

The text superimposed on the photo reads: “The King of Thailand summons Muslim clerics to pray to get rid of covid 19.”

Thailand has recorded relatively low cases of Covid-19 since its first reported case on January 13, 2020. However, the number of cases has surged since December 21, 2020, after an outbreak at a shrimp market in Samut Sakhon province, bringing its national tally to more than 9,300 confirmed cases with 66 deaths, according to the World Health Organization’s data on January 6, 2021.

The footage has been viewed more than 20,000 times in other posts on Facebook here, here, here and here; on Twitter here; as well as on YouTube here and here, alongside a similar claim.

The same video with a similar claim in Malaysian language is also shared on Facebook here and here.

Reverse image and keyword searches on Google found the footage is part of this two-hour video streamed live by ThaiTV2 on its YouTube channel on December 18, 2020.

Translated from Thai to English, the video’s title reads: “Live broadcast: His Majesty the King and Queen bestows prize to the winner of the 2020 Koran scripture readings.”

Below is screenshot comparison between scenes in the footage in the misleading post (L) and ThaiTV2 video (R): 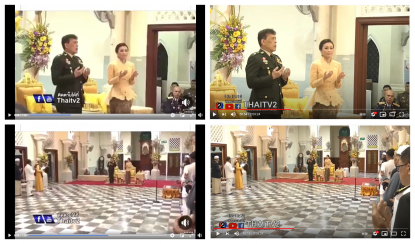 The Nation, an English-language Thai newspaper, published a report on December 19, 2020, about the event here, headlined: “Their Majesties preside over Quran competition.”

“His Majesty King Maha Vajiralongkorn and Her Majesty Queen Suthida on Friday presided over the 2020 Quran recitation competition at the Central Mosque in the Muang district of Pattani province,” the report reads.

“Their Majesties also gave honorary plaques and money to the provincial Islamic councils, imams and representatives from private Islamic schools in the South who demonstrated excellent achievements in Islamic teachings over the past year.”

AFP Fact Check has also debunked a video about the Thai king chanting Islamic invocations to get rid of coronavirus here.