Controversial Austrian bill does not involve banning Muslims from politics

Facebook posts circulating in Sri Lanka claim Austria has banned Muslims from engaging in politics. This is misleading; although Austrian lawmakers attempted to curb "political Islam" with a bill due to be voted on shortly, the controversial term was dropped from the text following widespread criticism.

The claim was published on Facebook here on December 30, 2020. The post has been shared more than 600 times.

“Austria strengthens laws against Muslims
"Cannot engage in politics
"Lifetime imprisonment for those who encourage terrorism and citizenship annulled.
"Government tells peaceful Muslims to not fear” 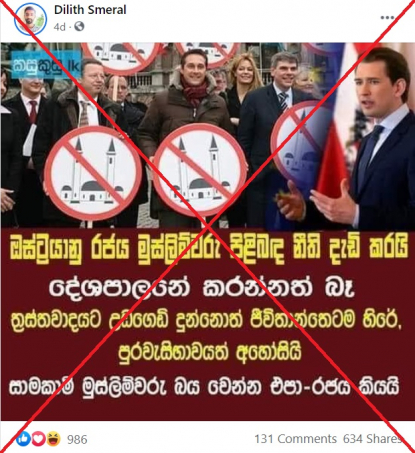 The image was also shared on Facebook here, here and here.

Following a November 2 attack in Vienna in which four people were killed before the gunman was shot dead by police, Austrian Chancellor Sebastian Kurz’s government pledged a controversial bill to curb ‘political Islam’.

The proposals included introducing preventive detention for people convicted of terror offences, making it easier to strip dual citizens convicted of terrorism offences of their Austrian citizenship and in some cases, monitoring people with an electronic ankle bracelet or a wristband after their release from prison.

Even if people had served their sentences for terror offences, but were not yet seen as being completely deradicalised, "we will make it possible to lock those people up in order to protect the public," Kurz told a news conference in November.

However, the prospect of preventive detention was subsequently dropped amid worries it would not be legal, a correspondent at AFP’s Vienna bureau said.

Kurz also said the government planned to simplify the process of shutting down associations or mosques deemed to play a role in radicalisation. The proposals also included creating a central register of imams.

However, the bill did not propose banning Muslims from engaging in politics.

It was revised in December and the term “political Islam” was replaced with more neutral language referring to “religiously motivated extremism”.

There is no fixed date for when the new draft law will come before parliament for approval although it is expected to be early this year.