A video has been viewed thousands of times on YouTube and shared in multiple Facebook and blog posts that claim it shows Philippine President Rodrigo Duterte survived an "ambush" in December 2020. The claim is false; the video shows unrelated clips, including an old Duterte speech. In response to the social media posts, the Philippine military refuted the false claim. There have been no credible reports from official media organisations that Duterte survived an attempted ambush in December 2020. 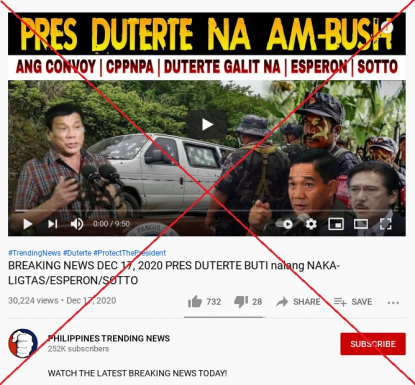 A screenshot of the misleading post, taken on January 6, 2021

“CPP” and “NPA” are acronyms for the Communist Party of the Philippines and its armed wing, the New People’s Army.

One clip, for example, is a mirrored version of this CNN Philippines report published on July 25, 2017. It is titled: “Duterte: The NPA ambushed even my convoy”. The clip can be seen from the misleading video’s two-minute 51-second to five-minute 43-second mark.

Another clip, seen at the video’s seven-minute 31-second mark to its eight-minute 26-second mark, shows this report by Philippine media organisation Inquirer published on July 26, 2020. It shows Sotto opening a session of Congress. The clip's audio, however, corresponds to Sotto’s remarks given in this speech on December 17, 2020.

None of the clips support the false claim that Duterte survived an ambush in December 2020.

Below are a set of screenshot comparisons showing clips from the misleading video (L) and the footage they were originally taken from (R): 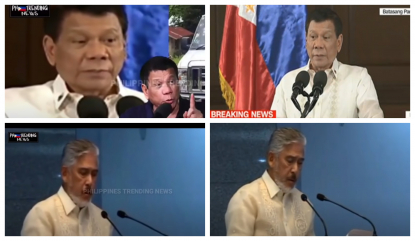 In response to the false social media posts, a Philippine military spokesperson told AFP the claim about an alleged ambush attempt against the president in December 2020 was not true.

“The YouTube video is not validated,” the spokesperson said by Viber message on January 6, 2021.

There have been no credible news reports indicating that Duterte survived an alleged ambush attempt in December 2020.

The misleading claim was also debunked here by Factrakers, a fact-checking initiative based at the University of the Philippines.