A video has been viewed hundreds of thousands of times in multiple posts on Facebook and YouTube alongside a claim it shows Thailand's King Maha Vajiralongkorn chanting an Islamic invocation to get rid of coronavirus. The claim is false; the video has previously circulated in reports about the Thai king presiding over a celebration of the Prophet Muhammad's birthday in Bangkok in April 2019, months before the first coronavirus case was reported in Thailand.

The post's Indonesian-language caption translates to English as: “The King of Thailand, the Military and the Government Officials chanted Islamic invocation without wearing masks praying for the corona outbreak to go away”. 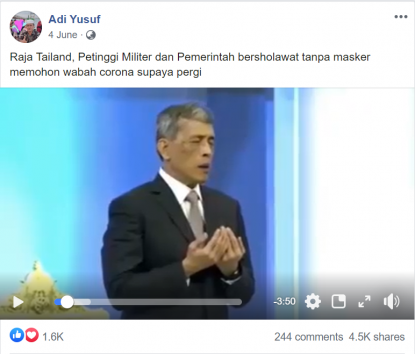 Since then, Thailand has recorded more than 3,200 confirmed coronavirus cases with 58 deaths, according to the WHO tally on July 10, 2020, here.

The video has been viewed more than 87,000 times after it was shared with a similar claim on Facebook here, here, here and here; as well as on YouTube here and here.

A reverse image search on Google followed by a keyword search found the longer version of the video was posted here on the YouTube channel for the National Broadcasting Services of Thailand (NBT) on April 3, 2019.

The video's Thai-language title translates to English as: “Live broadcast of His Majesty the King's inauguration of the Annual Mawlid in Thailand for 1440 Hijri.”

The caption reads: “Live broadcast of His Majesty the King presiding over the Annual Mawlid in Thailand 1440 Hijri, at the National Islamic Affairs Administrative Center Chalerm Phrakiat, April 3, 62 B.E.”

The same scene with the footage in the misleading post can be seen at the 50-minute 36-second mark of the NBT video.

Below is a screenshot comparison of scenes in the video in misleading post (L) and the NBT video (R): 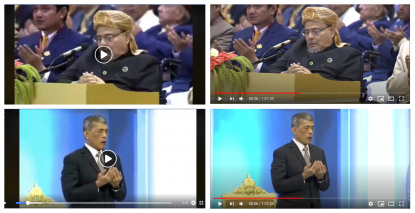 The Nong Chok District Office also published an article about the event here. The Thai-language title translates to English as: “Thais in Nong Chok are granted an audience to His Majesty King Maha Vajiralongkorn.”

The article's first paragraph reads: “On April 3, 2019, His Majesty King Maha Vajiralongkorn presided over the inauguration ceremony of ‘The Annual Mawlid of Thailand for the year 1440 Hijri’ at the National Islamic Affairs Administrative Center, Chalerm Phrakiat, in Nong Chok District, Bangkok. His Majesty granted an audience to the Sheikhul Islam and the organizing committee, Governor of Bangkok Gen. Aswin Kwanmuang together along with the Bangkok management team, Mr. Wuttipat Khamprakob, Director of the Nong Chok District Management Team of Eastern Bangkok District Group, District Officers and Thai Muslims.”

The Royal Family of Thailand also uploaded this video of the Thai king attending the event on its official YouTube channel on April 3, 2019. The video’s title translates to English as: “His Majesty the King presided over the annual Mawlid in Thailand 1440 Hijri.”