A video has been viewed millions of times on Facebook and YouTube alongside a claim that it shows Gibran Rakabuming Raka, the eldest son of Indonesian President Joko Widodo, has been summoned by the anti-corruption agency over a food aid graft case. The claim is false; the video shows the press briefing of the agency’s deputy chairman, who does not announce a summoning for Gibran.

The nearly 12-minute video’s Indonesian-language headline translates to English as: “TODAY’S NEWS: GIBRAN IS POWERLESS AS HE IS SUMMONED BY KPK IN RELATION WITH THE SOCIAL ASSISTANCE FUND CORRUPTION CASE!!” 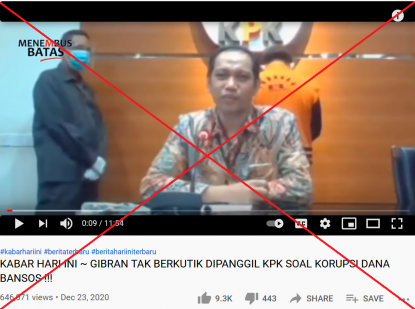 “Gibran” refers to Gibran Rakabuming Raka, the eldest son of Indonesian President Joko Widodo. In December 2020, Gibran won the mayoral election in Surakarta, also known as Solo – the city where his father started his political career as mayor in 2005.

The video was also shared here, here and here on Facebook, where it has been viewed more than 1.8 million times.

The video contains two sequences, one from a KPK news conference and the other from Gibran speaking to a TV presenter. However, there is no mention of him being summoned by the KPK in either clips.

An online search using video keyframes found that the KPK sequence was taken from this live-streamed video, posted on the agency’s YouTube channel on December 21, 2020.

The video shows KPK deputy chairman Nurul Ghufron speaking to the press about the Cirebon bribery case and other corruption cases, including the food aid bribery case.

The KPK sequence in the misleading video was taken from the 17:44 -18:11 mark of the original video.

In the original video, a journalist can be heard asking: “Could you explain to us about the rumour saying that the money from the food aid case also went to Solo?”

Nurul replied: “KPK welcomes anyone who wants to pass information about corruption cases during the pandemic, including the food aid case at the Social Affairs Ministry. We will gladly accept information regarding anybody’s alleged involvement, including information related to Mr. Gibran Rakabuming.”

The KPK deputy chairman does not announce a summoning for Gibran.

Another online search found the Gibran sequence in the misleading video was taken from this nine-minute video, posted on the YouTube channel of Kompas TV on December 21, 2020.

The video, which features the interview with the president’s son, is titled: “Gibran Denies He Was Involved in Goodie Bag Social Assistance Provisions.”

There is no mention of him being summoned in the video.