A video has been viewed thousands of times in multiple Facebook posts that claim it shows Israeli forces bombing a Palestinian mosque in May 2021. The claim is false: the footage actually shows a shrine bombed by the Islamic State group in Syria in 2014.

Adhan is an Islamic call to prayer from a mosque, while Eid is an Islamic festival that marks the end of the fasting month of Ramadan.

The background audio in the video is a recitation of Adhan.

Clashes between Israel and Hamas escalated in May 2021. More than 200 Palestinians were killed in deadly fighting, before a ceasefire was agreed on May 21.

A reverse image and keyword search on Google found a longer version of the video posted here on YouTube on June 8, 2014.

The video is titled: “Islamic State destroys the shrine of Uwais-al-Qarani.”

Below is a screenshot comparison of the video in misleading posts (L) and YouTube video (R). 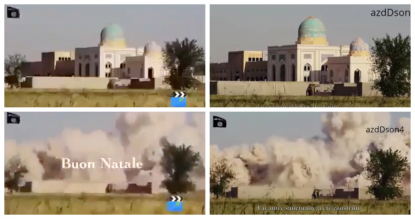 The watermark highlighted on the top-left corner in a screenshot (L) from the video is a flag of the Islamic State group, as seen in AFP photos below.

The Arabic language audio translates to English as: "Thanks to God, the Islamic State (..) has demolished a center of paganism (…..) in Raqqa (northern Syria), this place has been used by Shiites to spread their sect among Sunnis. in This place, there was a shrine that Shiites from everywhere came to visit."

Raqqa is a city in Syria, which became the capital of the Islamic State’s self-proclaimed caliphate.

A screenshot taken at the 01:16 mark in the Flickr video (L) of the structure of the shrine resemble the Google photo of the Owais-al-Qarni shrine (R) taken before the destruction here and here.

Details of the bombing feature in a report published in 2014 by the Center for Strategic Communication of Arizona State University.

The United Nations Institute for Training and Research (UNITAR) in 2015 published a report titled ‘Syria World Heritage Sites Report’ showcasing images of the site in Raqqa before and after the destruction of the mosque.

Below is a screenshot of the UN report shows the satellite imagery of the Raqqa shrine before and after the destruction:

Below is a screenshot comparison of Google earth images taken before and after the destruction of the shrine:

Reuters news agency published a report here in March 2014 about the destruction of the Owais al Qarni shrine in Raqqa by the Islamic State group.