These images were taken by NASA’s Curiosity rover on Mars

A clip has been viewed thousands of times on Facebook alongside a claim that it shows images of Mars captured by Chinese rover Zhurong. The claim is false; the imagery was taken by NASA’s Curiosity rover on Mars.

“China is the first Mars mission to carry out an orbiting, landing and rovering operation in its Maiden mission. Zhurong rover is well equipped to roam farther during its mission that the previous mission were unable to do so.” 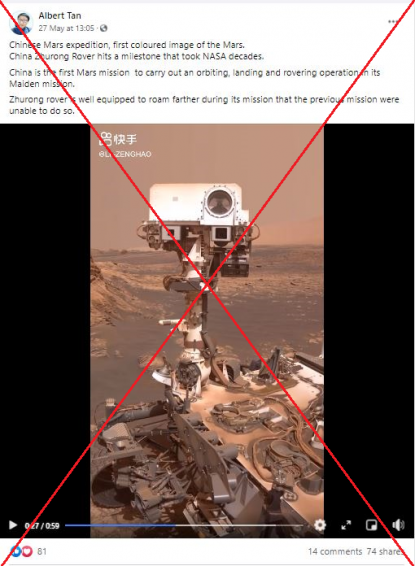 The Chinese Zhurong rover began exploring the surface of Mars on May 22, 2021, a week after it landed, making China the second nation to land and operate a rover on the Red Planet, AFP reported here.

A reverse image search on Yandex found this clip, posted by the same Kuaishou user in May 2021.

Screenshot of the video on Kuaishou

Translated from Chinese to English, the clip’s caption reads: “Let’s take a look at the rocks on Mars, 400 million kilometres away from the Earth! #Kuaishousciencepopularisation #Mars rover”.

Further searches found this NASA picture from March 30, 2021, which shows similar features to those in the misleading video. The picture is titled: “Curiosity’s selfie With ‘Mont Mercou’”.

Curiosity, which is part of NASA’s Mars Science Laboratory mission, is the largest rover ever sent to Mars, where it landed in August 2012.

Below is the screenshot comparison between scenes in the misleading clip (L) and the NASA picture (R): Zhurong sent its first images from Mars on May 19, 2021, which can be seen here and here on the China National Space Agency (CNSA) website.

Below is a screenshot of one of Zhurong’s photos on the CNSA website: 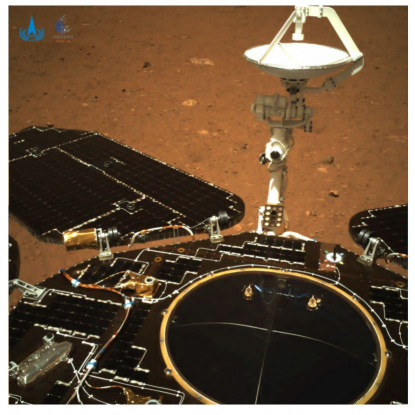 Screenshot of one of Zhurong's photos on the CNSA website

AFP has previously debunked a different video that was purportedly taken by NASA's Perseverance rover in February 2021, but was in fact captured by the Curiosity rover in 2019.