Skip to main content
This NASA photo released on February 24, 2021 shows images from NASA's Mars Perseverance rover taken after touching down on the Red Planet on February 18, 2021. (AFP / Handout)

A video has been viewed tens of thousands of times in Twitter, Facebook and Weibo posts alongside a claim it shows visual footage and sound captured by NASA’s Perseverance rover during the US space agency's latest Mars mission in February 2021. The claim is false: the video was actually created with a panorama captured by NASA’s Curiosity Mars rover in 2019.

The video was published on Facebook here on February 20, 2021. It has been viewed more than 500 times. 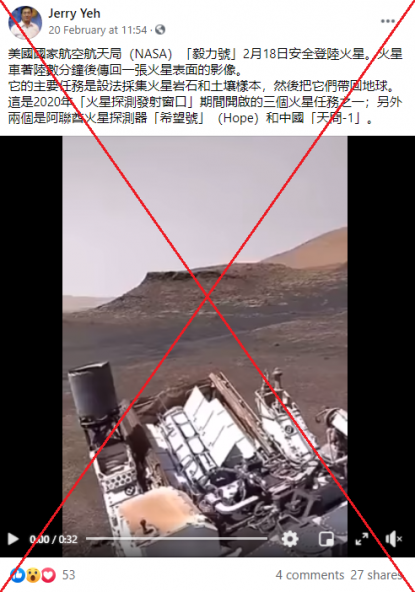 Part of the post’s traditional Chinese caption translates o English as: “The National Aeronautics and Space Administration's (NASA) [Perseverance] landed safely on Mars on February 18. Minutes after landing, the rover sent back this footage showing the surface of Mars.”

The post was circulated shortly after NASA’s Perseverance rover landed successfully on Mars on February 18, 2021.

A keyword search on Google found this panorama published on NASA's website on March 4, 2020.

Screenshot taken on February 23, 2021, of the webpage showing the panorama

The caption of the panorama reads: “Curiosity's 1.8-Billion-Pixel Panorama: NASA's Curiosity rover captured its highest-resolution panorama of the Martian surface between Nov. 24 and Dec. 1, 2019. A version without the rover contains nearly 1.8 billion pixels; a version with the rover contains nearly 650 million pixels. Credits: NASA/JPL-Caltech/MSSS.”

The panorama corresponds with details from the misleading video.

Below are three screenshot comparisons between the misleading video (L) and the panorama captured by NASA’s Curiosity rover (R): 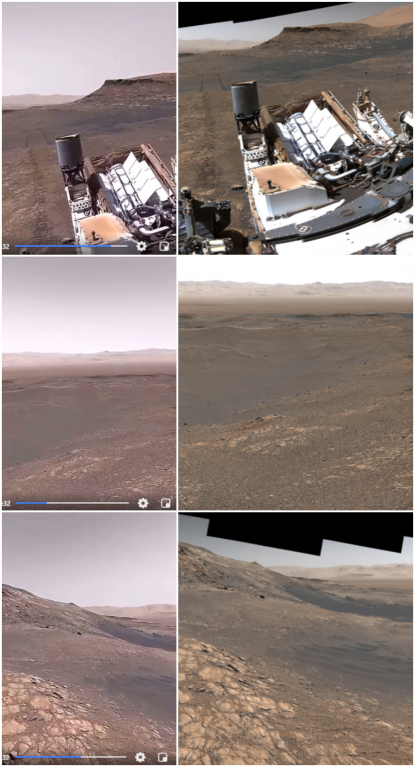 NASA’s Perseverance rover released its full image of Mars on Twitter on February 23, 2021. The imagery does not match the video shared in the misleading posts.

"It's been a firehose of data."

The sounds from Mars collected by Perseverance was also shown to the public on the same date in this tweet, however, the sound from this audio clip doesn’t match the sound in the misleading video.

Now that you’ve seen Mars, hear it. Grab some headphones and listen to the first sounds captured by one of my microphones. 🎧https://t.co/JswvAWC2IP#CountdownToMars

A further analysis of the audio in the misleading video found it contains similar sounds from this audio clip captured by NASA’s Mars InSight Lander in 2019 but has likely been amplified.