The image was published on Facebook here on February 22, 2021. 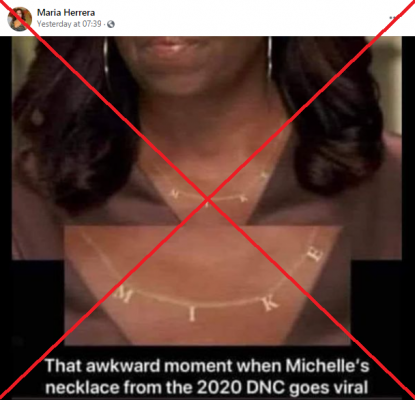 "That awkward moment when Michelle's necklace from 2020 DNC goes viral," the text under the image reads.

DNC is an acronym for the annual Democratic National Convention, which was held mostly virtually in August 2020.

A review of Obama's 2020 DNC speech show she was in fact wearing a necklace that spelled out "VOTE" -- not “MIKE”.

Obama's address on August 18, 2020, can be seen on the DNC's official YouTube channel here and in video published by The Washington Post here.

Below is a screenshot comparison of doctored image (L) and a screengrab from The Washington Post’s video at 00:43 mark (R):

A screenshot comparison between the image in the misleading Facebook Post (L) and a screengrab from The Washington Post’s video at 00:43 mark (R).

"The necklace spelled out the word VOTE, as she encouraged viewers to 'vote for Joe Biden and Kamala Harris like our lives depend on it'," AFP reported.

The "VOTE" necklace was designed by BYCHARI, a Los Angeles-based jewelry company. It can be seen on the company's website here.

"Michelle Obama donned this piece at the 2020 Democratic National Convention, encouraging people to do just that: have a say and vote," the company's description of the necklace reads.