A video viewed hundreds of thousands of times in multiple Facebook posts purports to show a television news report from Myanmar's state-owned MRTV announcing civil servants and pensioners will no longer receive state payments following a government order. The posts circulated online after some Myanmar civil servants went on strike following a military coup on February 1, 2021. The claim is false: the footage has been doctored to include a false announcement. 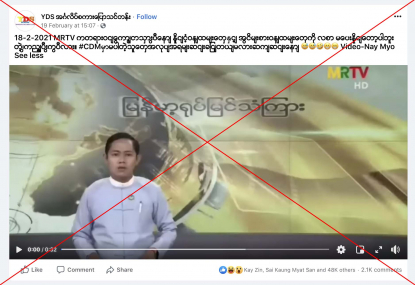 A screenshot of the misleading video taken on February 24, 2021

The video's Burmese-language caption translates to English as: “18-2-2021 MRTV made an official announcement that civil servants and pensioners will not receive payments. Have you watched it?

"For those who don't want to join #CDM, you can go to work as you wish."

"CDM" refers to the Civil Disobedience Movement (CDM), an anti-government protest group that was established after the military coup on February 1, 2021.

The narrator in the video can be heard saying: “The State Administration Council had made an announcement article no. 73/2021 on February 18, 2021. The article announced that the government will no longer be giving salaries and pensions to the civil servants and pensioners from now on.”

Myanmar Radio and Television, MRTV is a state-owned radio and television channel.

The video circulated online as many of Myanmar's civil servants went on strike following a military coup on February 1, 2021. AFP reported on the strikes here.

The same video has been shared here, here and here on Facebook alongside a similar claim.

The claim, however, is false: the video has been manipulated.

A closer analysis of the doctored video found it had been created using three separate clips.

Keyword searches found the first 13 seconds of the doctored video published here on MRTV’s YouTube Channel on February 18, 2021. The television presenter can be heard giving an introduction from the 27-second mark to the 40-second mark.

From the 13-second mark to 22-second mark, the doctored video corresponds with another clip on MRTV’s YouTube channel published here on February 18, 2021. The clip relates to the announcement of Article No.73/2021 -- the appointment of Myanmar Central Bank members.

It does not relate to the payments to civil servants and pensioners, as was falsely stated in the doctored video.

The Myanmar military announced the formation of the State Administration Council on February 2, 2021, one day after a military coup.

In the video below from the one-second mark to 10-second mark, the presenter can be heard saying the Myanmar State Administration Council issued Article No.73/2021.

In the third section of the doctored video (from its 22-second mark), the presenter's mouth does not match the words heard in the clip's audio.

The audio repeats that the state administration council announced Article No.73/2021. Part of this MRTV clip can be seen again at this point.

Below are three screenshot comparisons showing the doctored video (L) and the original clips on MRTV’s YouTube channel (R): 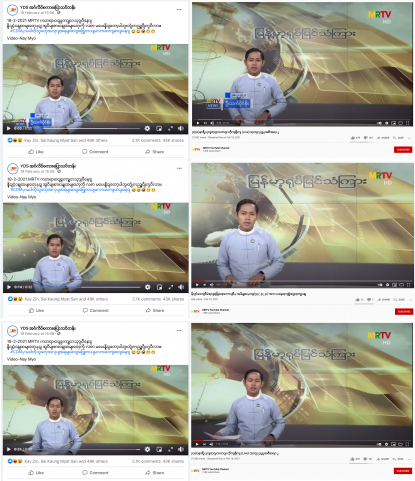 MRTV reported here and here in February 2021 that pensioners can withdraw their pensions from Mobile Money service or ATM machines.