A photo showing a frozen waterfall inside a house has been shared on social media with claims that it was taken in Texas during the recent devastating winter storm. This is false; the image has been on the internet since 2018, more than two years before unusually cold weather wreaked havoc in the southern United States.

Another Facebook post, this one with more than 250 shares, features the caption: “Houston is Freezing right now!” 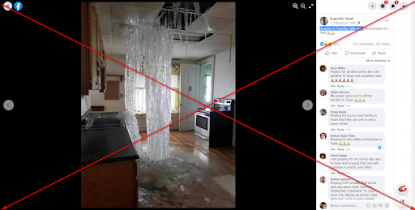 The same claim was also shared here on Twitter, adding that this was the result of frozen water pipes that had burst.

While it is clear that the image is not recent, AFP Fact check has not been able to establish the location or origin of the picture.

AFP Fact Check has debunked other claims related to the Texas winter storm here and here.

Last week, Texas was hit hard as a frigid airmass paralyzed parts of the southern and central United States, claiming more than 70 lives. Millions of people were left temporarily without power and water lines were frozen.

Following the storm, US president Joe Biden issued a major-disaster declaration for much of Texas so as to provide badly-needed financial and administrative aid.

The state’s governor has ordered an investigation into its power grid operator, while several of the operator’s board members have resigned. The Federal Energy Regulatory Commission has also said it will probe the factors behind the power outages.