Skip to main content
A Waco, Texas, resident clears snow from his driveway alongside his dog on February 17, 2021 (AFP / Matthew Busch)

Claims that an image shows a helicopter de-icing a wind turbine in the state of Texas have circulated online as a winter storm left millions of people without power in the southern United States. But the photo was taken in Sweden years earlier, and although some American politicians have used the blackouts to criticize renewable energy, electricity from fossil fuels accounted for the bulk of the lost production in Texas. 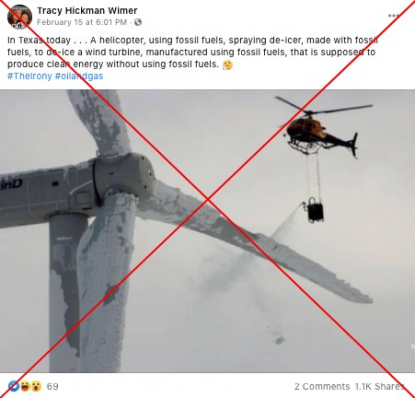 The claim also appears on Facebook here and here and in an online article here.

Texas has seen the worst power outages of the states affected by the deadly winter storm, with the Electric Reliability Council of Texas, which operates much of its power grid, underestimating the surge in demand caused by the unusually cold weather and using planned outages to avert an uncontrolled blackout.

But the photo shows a de-icing effort in Sweden, and news articles that used it credited the photo to Alpine Helicopter, a Swedish helicopter transportation company.

“This picture is from one of my helicopters and was taken years ago during a de-icing test project with water in northern Sweden,” Alpine Helicopter managing director Mats Widgren told AFP by phone.

Widgren confirmed that the liquid used on the turbine blades was hot water, not a de-icing solution as posts claimed.

However, the winter storm in Texas did result in 40 percent of the Lone Star State’s electricity generating capacity going offline, Kevin Liao, a spokesman for the US Department of Energy, said by email.

This was “largely driven by cold weather effects on natural gas, coal and even nuclear facilities as well as limited supplies of natural gas. There have also been limited impacts on generating capacity from iced over wind facilities.”

And Andrew Barlow, a spokesman for the Public Utility Commission of Texas, which regulates the state’s electric utilities, said by email that icing on wind turbines removed their anticipated electricity contribution from the grid to the tune of 16,000 megawatts as of February 16.

But the loss from non-renewable sources was almost double that.

Barlow did not know which specific methods had been used to de-ice wind turbines in Texas in February 2021.

Electricity was gradually being restored but hundreds of thousands of households in Texas, the US oil and gas capital, remained without power on February 18. Many had to leave their homes and millions were advised to boil water.

Public figures were quick to politicize the shortcomings in Texas’s energy grid, with Republican Texas governor Gregg Abott claiming on television that “the Green New Deal would be a deadly deal for the United States of America.”

Dan Crenshaw, a Republican congressman from the state, said in a Twitter thread that: “This is what happens when you force the grid to rely in part on wind as a power source.”

The Green New Deal is a congressional effort that would provide an all-encompassing roadmap for tackling climate change, and has become a signature initiative of Representative Alexandria Occasio-Cortez. President Joe Biden has shown interest in implementing some of the policies it includes.

Occasio-Cortez hit back at Abbott’s remarks on Twitter, writing that he “doesn’t seem to have a grasp on his state, so here’s a reminder: Texas runs 80-90% on fossil fuels.”

Other false information brought in from the cold included the claim that a Texas pastor refused to open his church to the needy during the storm.