A picture showing an exposed scalp has been shared thousands of times on Facebook and Twitter alongside claims that it shows Tessica Brown – better known on social media as “Gorilla Glue girl” – after scraping off her hair which she had applied to her head with glue spray. Brown’s beauty mishap went viral on social media but the image being associated with her is old and unrelated.

A Facebook post shared more than 15,000 times claims to provide an update on Brown “looking like Myra,” a movie character, played by American actress Bebe Drake-Massey, who lost her hair after perming it in an episode of the 1990s TV show Martin. 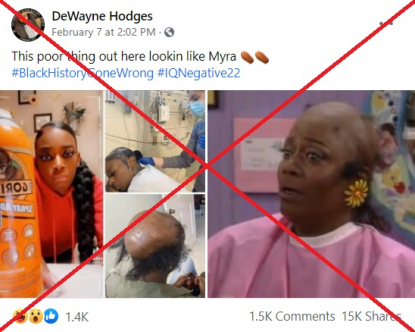 Screenshot taken on February 10, 2021 showing a scene from the TV show Martin (right) and purported pictures of Tessica Brown

One of the images in the post shows an unidentified person with sparse hair seated in what looks like a waiting room. The same picture was used on Facebook here, with the caption: “Update on sis with the Gorilla glue ponytail.”

It was also shared on Twitter alongside a similar claim that Brown had finally removed the glue, leaving her mostly bald. 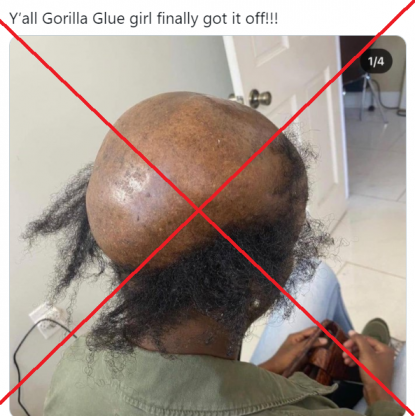 A screenshot taken on February 10, 2021 showing the false post

Earlier in February, Brown explained in a TikTok video that she had run out of regular hair spray and decided instead to use Gorilla Glue, an adhesive for materials like wood, glass and metal that the manufacturing company says “forms a clear, permanent bond that is moisture resistant”.

Brown’s hair kept its form for more than a month, she said in the video, which went viral and has been seen more than 20 million times. Brown used her newfound fame to start a fundraiser, generating more than $17,000.

Picture does not show Brown’s scalp

AFP Fact Check ran multiple reverse image searches on the picture used to claim that Brown had scraped off her hair and found that it was online months before her ordeal.

We traced the earliest version to an Instagram account in Nigeria that advertises wigs and hair products. The image was posted here on October 22, 2020.

AFP Fact Check asked the account owner for more information about the picture. We will update this article if we receive a response. 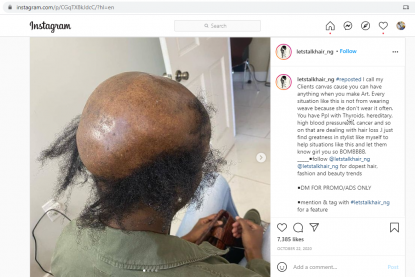 Help on the way

Brown explained on her verified Instagram account that she eventually sought help at St. Bernard Parish Hospital in Louisiana. New York Post reported on February 11, 2021, that Brown finally had the product removed by a plastic surgeon.

The Gorilla Glue Company wrote on Twitter that it was sorry to hear about Brown’s ordeal, and advised that the glue should not be used on the body. “This is a very unique situation because this product is not indicated for use in or on hair as it is considered permanent,” the company stated. “Our spray adhesive states in the warning label ‘do not swallow. Do not get in eyes, on skin or clothing...’”