A video of Pakistani Prime Minister Imran Khan has been viewed more than one million times in multiple posts on Facebook, Twitter and YouTube alongside a claim that it shows him being ridiculed by a caller during a live phone-in. The claim is false: the clip has been edited to insert the audio recording of the purported call. An earlier version of the video circulating online does not contain the purported call.

The two-minutes 38-second video clip was shared on Facebook here on February 2, 2021. It has been viewed more than 1.3 million times and shared 66,000 times.

The post’s Urdu-language caption translates to English as: “This is called international grilling. Unofficial result of online calls.”

The video purportedly shows Imran Khan listening to a caller who identifies himself as “Gul Khan”. The caller goes on to make sarcastic remarks directed at Khan.

“Due to your efforts God willing Pakistan is going ahead of Switzerland,” Gul Khan says in a sarcastic remark at the one-minute 30-second mark of the video.

“There are no unemployed people in Pakistan today. People are coming from China, Korea and the US for jobs (in Pakistan),” Gul Khan says at the 45-second mark.

At the one-minute 20-second mark, the caller says: “Electricity is free and petrol prices are also crashing every day and Pakistan is progressing.” 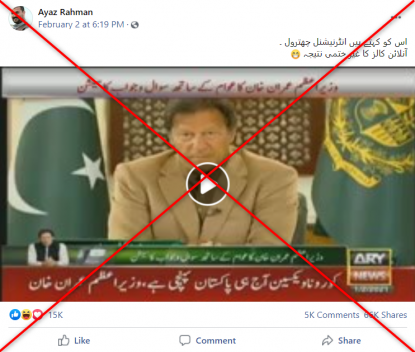 Some social media users posted comments in response to the video which indicated they believed it was not authentic, while others appeared to be misled by the clip.

The claim is false: the clip has been edited to include the audio recording of the purported caller’s comments.

The original videos can be viewed here on ARY television channel website and on the YouTube channel of the prime minister’s office here.

A careful examination of the livestream on the prime minister's YouTube account found that no caller named “Gul Khan” called Khan to ridicule him.

At the 14-second mark of the video in the misleading posts, a name for “Nadeem Khan” from Dir, a town in northwestern Pakistan, appears on the screen when the purported caller gives his name as Gul Khan.

Below is a screenshot comparison of the video in the misleading posts (R) and the video from the prime minister's office (L) with the doctored chyron marked in red by AFP:

Pakistani newspapers Dawn and The News reported on the event here and here.