These photos were taken years before the military coup in Myanmar

As the Myanmar military continued a deadly crackdown on dissidents, photos circulated in Facebook posts alongside a claim they show members of an ethnic armed group seizing a town. The claim is false: the photos have circulated online in various news reports since at least 2011.

“This is what we called the battle of seizing the town. KIA soldiers took up positions in Kamaing,” the Burmese-language caption reads, referring to a town in northern Myanmar.

The Kachin Independence Army (KIA) is an ethnic armed group in Myanmar.

Rebels have stepped up attacks on the military after February’s coup, which ousted civilian leader Aung San Suu Kyi and triggered mass uprisings.

More than 800 people have been killed by security forces in a crackdown that has left the country in turmoil. 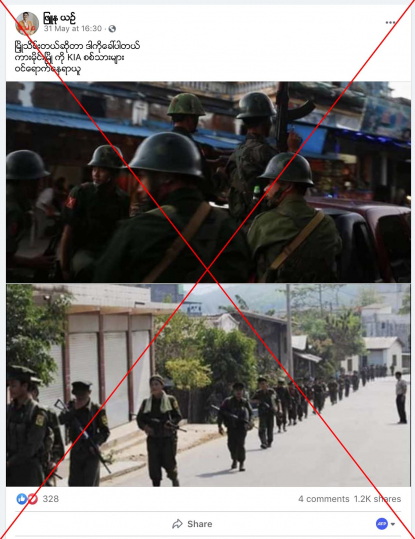 The photo's caption reads: “Soldiers of Kachin Independence Army (KIA) patrol around the town in the evening. Recent fight between Myanmar government and KIA at the Mansi area awakes Laiza to stay alert.”

The photo was featured in a series of images called “Burma’s Hidden War” by Yangon-based photojournalist Htoo Tay Zar.

It documents the ongoing conflict between the Myanmar military and the KIA.

The photo can also be found on Htoo Tay Zar’s website.

Below is a screenshot comparison of the photo in the misleading Facebook photo (L) and IPA’s photo (R).

(A screenshot comparison between a misleading Facebook photo (L) and IPA’s photo (R).)

Another reverse image search found the second photo was published in a report by Myanmar news outlet Irrawaddy here on October 17, 2011.

The photo was shared in the Jinghpaw Kasa Blog, which describes itself as pro-KIA. It was published in this post on October 7, 2011.

Below is a screenshot comparison of the misleading Facebook photo (L) and the photo on Jinghpaw Kasa blog (R):