The Indonesian-language text superimposed on the clip reads: “Best of luck in your fight the nation’s heroes, may the Almighty God protect you

“Moments of the departure of Indonesian troops to Palestine”. 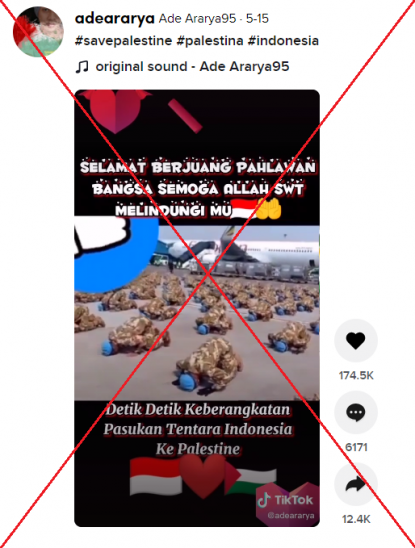 The recent conflict between Israel and Hamas, which escalated on May 10, 2021, has killed hundreds of people, the majority of whom are Palestinians in Gaza, AFP reported on May 23, 2021.

The same clip has been watched more than 8.6 million times after it was posted alongside a similar claim on Facebook here, here, here and here; on YouTube here; as well as on TikTok here.

A reverse image on Yandex, followed by keyword searches on Google, found this photo, posted on the official Instagram account of the Indonesian military’s information center on January 20, 2021.

Translated from Indonesian language to English, the caption reads: “A total of 186 personnel from the Garuda Contingent of United Nations Interim Force in Lebanon (UNIFIL) Chalk 3 Task Force, in 2019 under the command of Colonel Inf Leonardo Sebastian arrived in Indonesia after carrying out a peacekeeping mission in Lebanon, at Soekarno-Hatta International Airport, Cengkareng, Tangerang, Wednesday (20/1/2021).”

Below is the screenshot comparison between the scene in the misleading clip (L) and Indonesian military’s photo (R), with similar features circled in red by AFP:

“The video is a documentation taken by an unknown person when the UNIFIL task force arrived from Lebanon,” he said on May 21, 2021.

Whimbo shared this article to show when the video was taken.

The article was published on the official Indonesian military website on January 20, 2021, with a headline: “After carrying out a peacekeeping mission, 186 personnel from the Indonesian military’s Garuda Contingent UNIFIL Chalk 3 Task Force arrive home.”