The post’s Burmese-language caption translates to English as: “In Mindat, Chin State. Everyone with a mobile phone, please share these pictures that show the struggles of our people. Post and share it so that the world will know. Thank you so much. The revolution must succeed”. 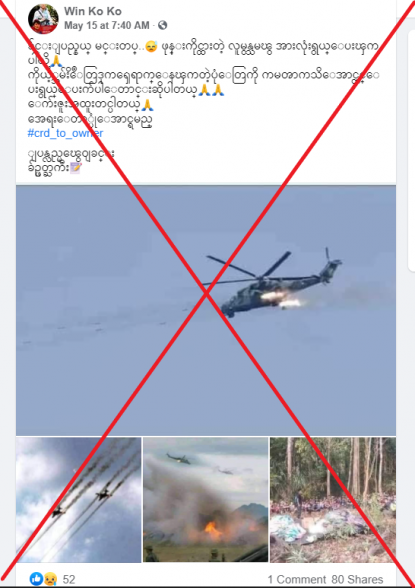 Residents of the town of Mindat in western Myanmar formed the Chinland Defence Force (CDF), arming themselves with homemade weapons to protect the town against the military. AFP reported on the story here on May 16, 2021.

In response, the military announced martial law on May 13, 2021 and bombarded the town with artillery.

The images were shared on social media after reports said the military had seized control of the town.

The images have been shared on Facebook here, here and here in a similar context about recent attacks in Mindat.

The first image can be found here on AFP photo archive dated February 2, 2018.

It shows a military exercise near Pathein city in southern Myanmar.

Below is a screenshot comparison of the misleading post (L) and the original image (R): The second image appeared in a report published by Russia’s RT News here on August 4, 2014. It is about a Russian military drill in the south of the country.

Below is a screenshot comparison of the misleading post (L) to the original image (R): 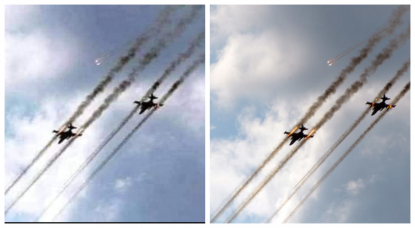 The third image appears to be doctored from a header image in Arakan Army’s announcement on its official website here on October 24, 2019.

Arakan Army is a Rakhine rebel group based in western Myanmar.

Below is a screenshot comparison of the misleading post (L) to the image on the Arakan Army’s website (R): 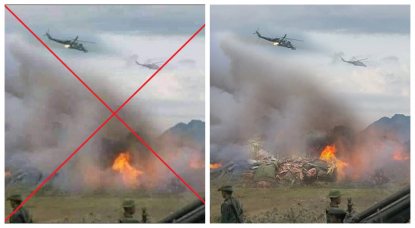 AFP could not independently verify the origin of the fourth image.

However, the image has circulated online since at least March 2021, months before the military attack in Mindat.

It was shared as tensions heightened between the Karen rebel group and the military after the coup. AFP reported the story here.

Below is a screenshot comparison between the fourth image in the misleading post (L) and the image in the March 2021 post (R): 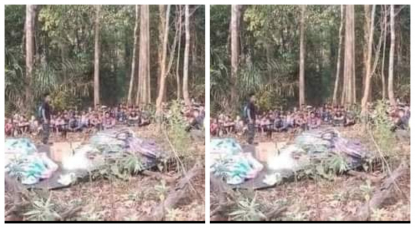