Multiple Facebook posts in Sri Lanka have shared an image which they claim shows a squadron of Israeli fighter jets lining up on a runway in preparation for an attack on Palestine in May 2021. But this claim is false: the image shows US fighter aircraft during a demonstration at a military base in South Korea in December 2012. 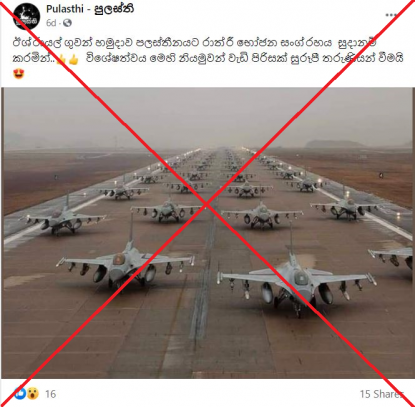 The image’s Sinhala-language caption translates as: “The Israeli Air Force preparing to serve a ‘grand dinner’ for the Palestinians. What’s special about this is that the majority of the pilots are females."

“Grand dinner” is an idiomatic phrase in the Sinhala-language for “heavy thrashing”.

The image circulated online days after deadly fighting erupted on May 10, 2021 between Israel and Hamas, the Islamist movement that controls Gaza. A ceasefire came into force on March 21, 2021, AFP reported.

Israeli strikes on Gaza have killed over 200 Palestinians, including 65 children. Rockets fired by Hamas and other Islamist armed groups in Gaza killed 12 people in Israel, including two children.

An identical image was also shared alongside a similar claim here, here and here on Facebook.

A reverse image search on Google found the photograph in fact shows US fighter jets lining up for a demonstration at a South Korean military facility.

Its caption reads in part: “F-16 Fighting Falcons demonstrate an 'Elephant Walk' as they taxi down the flightline at Kunsan Air Base, South Korea, Dec. 14, 2012. The Elephant Walk was a demonstration of U.S. and South Korean air force capabilities and strength.” 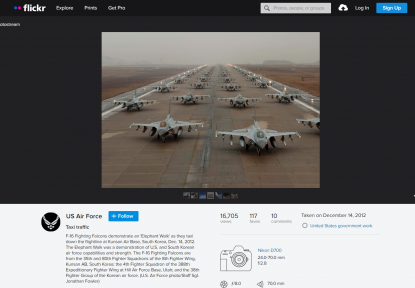 A screenshot of the US Air Force photo taken on December 14, 2012

The same photograph was also shared with the correct caption here by the American news organisation Business Insider on February 2, 2021.

As of May 25, 2021, no credible reports indicate Israel had prepared an attack on Palestine using a squadron of aircraft with all-female pilots.