A video has been viewed on Twitter and YouTube in September 2019 alongside a claim that it shows Indonesians assaulting a person from West Papua on a hospital bed. The same video has also been shared in multiple Indonesian-language posts on Facebook, YouTube and Twitter which claim it shows a student protester being beaten up. The claims are false; the video shows an incident at a hospital in Thailand in August 2019.

The video was published here on Twitter on September 25, 2019, where it was retweeted more than 100 times before it was removed.

The video’s caption states: “#Indonesians making certain a wounded #WestPapuan doesn't live to tell his story. I am, we are...West Papua! (forwarded to me by a friend)”.

The Papua region, in the easternmost part of Indonesia, comprises Papua and West Papua provinces.

A series of demonstrations have rocked Papua since August 2019 as protesters make fresh calls for self-rule in the region. AFP reported on the recent unrest on September 25, 2019, here. 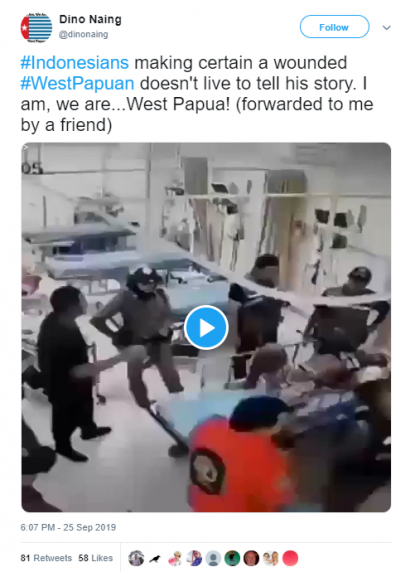 A shorter version of the video has been shared here on YouTube with a similar claim written in Indonesian. The footage has been viewed more than 240 times.

The video was also posted on Facebook here on September 25, 2019, where it has been viewed more than 170,000 times and shared more than 4,200 times, alongside Indonesian-language captions that claim a student protester was beaten up.

The footage and a similar claim about a student protester was also shared on Twitter here and YouTube here, where it has been viewed more than 2,300 times.

Indonesian students and police clashed in different cities in Indonesia on September 24, 2019, as thousands of students protested controversial laws and the rollback of reform. Here is an AFP report about the protests.

The claims are false; the video shows an incident at a hospital in Chonburi, southeast of Bangkok, Thailand, in August 2019.

A reverse image search on Google of a keyframe from the video found a similar clip of the same incident published here on the Facebook page for Chonburi News on August 28, 2019.

Chonburi is a province southeast of Thailand’s capital Bangkok.

The post’s Thai-language caption translates to English as: “What happened inside an emergency room at a hospital in Chonburi province. If you look carefully after the curtain is closed, it seems like a man is being beaten up”.

The timestamp visible on the top left-hand corner of the one-minute, 36-second video indicates the video was filmed shortly after midnight August 18, 2019.

Several uniformed men are seen standing next to a hospital bed where a man wearing a T-shirt and shorts is lying down. Some of the men draw the curtains, before a man wearing a cap can be seen raising his fist and slamming it down repeatedly. The man lying on the bed is obscured from view.

Below is a screenshot comparison of the video in the misleading post (L) and the clip published by Chonburi News (R):

Thai newspaper Thai Rath published the video in this report on August 28, 2019. 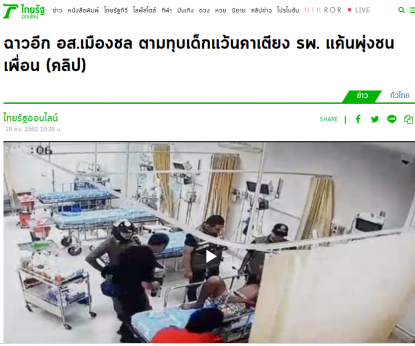 Screenshot of the Thai Rath report

The newspaper reported that a 20-year-old man was sent to Burapha University Hospital in Mueang Chonburi district after his motorcycle hit a 57-year-old defense corps volunteer.

The Volunteer Defense Corps is a Thai paramilitary that provides extra military support to the Royal Thai Armed Forces.

Prakasit Seuksongkram, the deputy chief for defense at Mueang Chonburi district, told local media that the attack took place and said the attacker, a defense corps volunteer, was angered by the injuries of his colleague, Thai TV Workpoint News and Nation 22 reported on August 28, 2019.

A man can be seen in the video wearing an orange uniform which corresponds with the uniform of the Chonburi Rescue Volunteer group which is a part of a Thai-Chinese foundation.

Below is a screenshot comparison of the uniform seen in the misleading post (L) and the uniform in this report by Bangkok-based Chinese-language news site Taiguo.com (R):

Screenshot comparison of the uniform seen in the misleading post (L) and in the Taiguo.com report (R)