A photo of Indonesian President Joko “Jokowi” Widodo has been shared repeatedly in multiple Facebook posts alongside a claim it shows him shedding a tear while he inspected forest fires in Riau province in September 2019. The claim is false; the photo has been doctored to include a teardrop on Jokowi’s face. 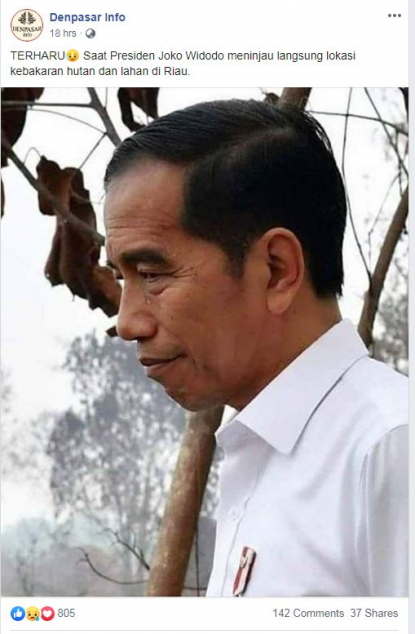 The post’s Indonesian-language caption translates to English as: “Touched When President Joko Widodo inspected the location of forest and plantation fires in Riau.”

Riau is a province in western Indonesia. Here is an AFP story about Jokowi’s visit to an area hard hit by forest fires in Riau on September 17, 2019.

The same doctored photo was also published on Facebook here, here and here, where it has been shared more than 120 times; and also on Twitter here with a similar claim.

The claim is false; the photo has been doctored to include a teardrop on Jokowi's face. The original photo was taken of the president while he inspected the forest fires in Riau.

Keyword searches on Google found the original photo published in this September 17, 2019, post on the official Facebook page of the State Secretariat Ministry. The post is embedded below.

The ministry’s post contains the original version of the doctored image.  It also includes two other photos that show the president talking to journalists. 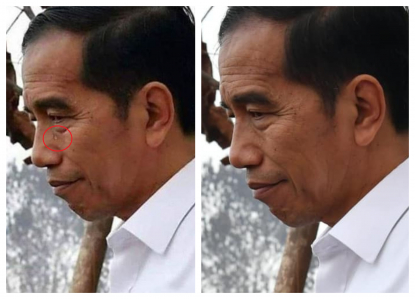