A photo of a purported news report has been shared thousands of times in a Facebook post which claims former Philippine president Ferdinand Marcos earned the “highest score ever” of 98.01 per cent in the country’s bar examination. The claim is false; the Philippine Supreme Court said former associate justice Florenz Regalado holds the national record for the highest bar exam score; Marcos topped his class with a score of 92.35 per cent in his bar exam in 1939, according to a genuine newspaper report at the time of his graduation. 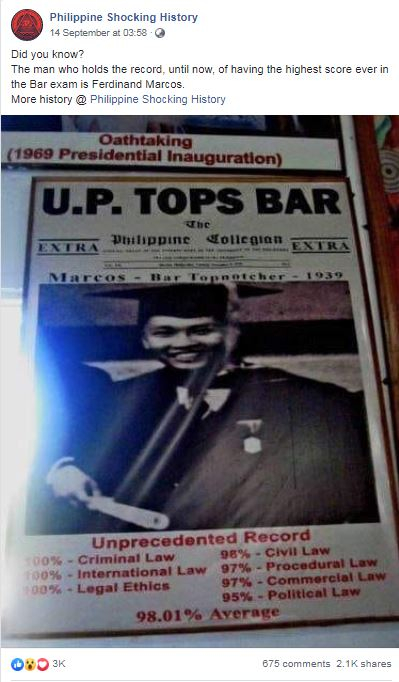 The post's caption states: “Did you know? The man who holds the record, until now, of having the highest score ever in the Bar exam is Ferdinand Marcos. More history @ Philippine Shocking History”.

Ferdinand Marcos was the 10th president of the Philippines. He placed the country under martial law in 1972 and was deposed in 1986.

The post contains a photo which purportedly shows a newspaper's front page with a headline that states: “U.P. TOPS BAR”.

U.P. refers to the University of the Philippines.

Below the banner, the masthead reads: “The Philippine Collegian”.

Below this text is a photo of a young Marcos in academic dress.

The Philippine Collegian is the official student publication of the University of the Philippines Diliman campus. The paper was founded in 1922.

The claim is false; the Philippine Supreme Court told AFP the highest bar examination grade was earned by Florenz Regalado, a former associate justice of the court.

In an email, the court told AFP: “To date, Ret. Justice Florenz D. Regalado still holds the record of having the highest Bar Rating among the Bar Topnotchers”.

The Supreme Court did not release Regalado’s and Marcos’ grades to AFP, saying it only provides results to the person who took the test.

But Regalado’s grade is shown on the website of Philippine Senate Electoral Tribunal, a body that decides on election protests and whose members include Supreme Court justices.

“He remains the record holder for the highest average in the Philippine Bar Examinations, with his 1954 mark of 96.7%.

Joel Ariate, a researcher at the University of the Philippines who has written about Marcos’ fake war medals among others, told AFP that a framed news report of Marcos topping the bar exam for his class in 1939 could be seen at the family-run Marcos museum in Batac.

Batac is a city in the province of Ilocos Norte some 470 kilometers north of the capital Manila.

Below is the photo from Ariate: 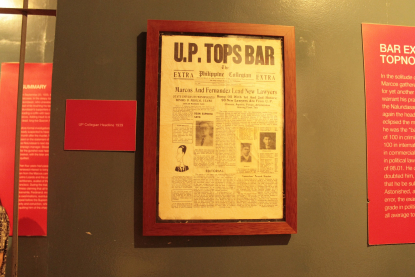 The photo Ariate showed AFP bears the same banner headline as the photo in the Facebook post, but with different elements below the masthead.

Below is a comparison of the Facebook photo (L) and the photo from Ariate (R):

Several visitors to the Marcos museum in Batac have uploaded their own photos of the framed report by The Philippine Collegian including here, here and here.

A close up photo of the framed report was uploaded here on TripAdvisor.

According to the photos of the original news report, Marcos’ bar exam average was 92.35 per cent.

The relevant portion of the framed article states: "Again the College of Law of the State University topped the Bar examinations held last August, Ferdinand Marcos, U.P. obtained the first place with 92.35%, trailed by Ramon C. Fernandez also of U.P. and class valedictorian, in a close second with 90.25%."

Below is a screenshot, with the average circled by AFP: 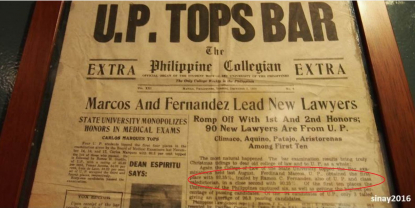