An image of a man being arrested by two South African police officers has been shared hundreds of times in Facebook posts claiming he was detained after brutally torturing his daughter's rapist. However, a reverse image search shows that the man was in fact arrested during looting and clashes that broke out during an anti-foreigner protest in South Africa in 2017.

One Facebook post carrying the image has been shared more than 800 times since it was shared on September 23. We’ve archived it here.

The image has an embedded caption which reads: “This Soweto father tracked down the man who raped his 3-year-old daughter, tied him to tree, cut off the rapist’s penis, cooked it and forced him to eat it.” Soweto is a township just outside South Africa’s largest city, Johannesburg.

In the comments, some online users expressed approval at the man’s supposed actions, endorsing such punishments against child rapists. 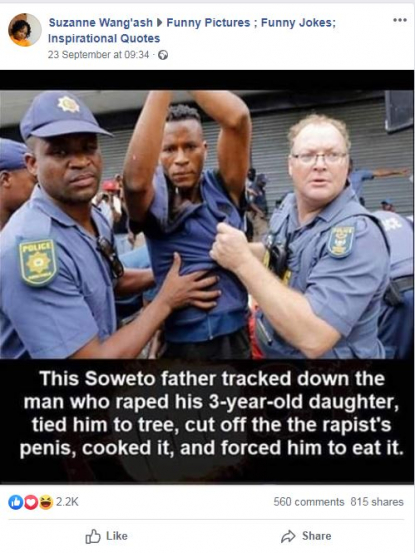 Screenshot taken on October 1, 2019 showing one of the Facebook posts sharing the wrongly-captioned photo

The same image was shared on Group Kenya, a Facebook group with more than two million members, alongside the caption: “I want to marry this Soweto man and give him 10 kids???. Won't mind been a fourth wife either.”

We ran a reverse image search for the picture using the search engine TinEye, which traced the picture to an article published on the website of Britain’s Daily Mail newspaper in 2017. 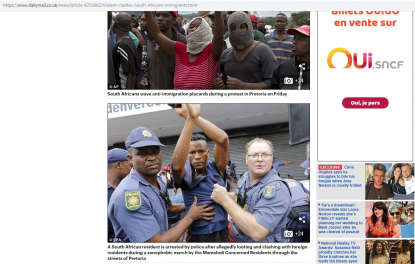 Screenshot taken on October 1, 2019 of the picture as it appears on the Daily Mail website

According to the caption, the photo shows a South African resident being arrested “after allegedly looting and clashing with foreign residents during a xenophobic march by the Mamelodi Concerned Residents through the streets of Pretoria”.

The article itself details violent clashes between South Africans and immigrants from other African countries in Pretoria, the country’s administrative capital, which is around an hour’s drive north of Soweto.

Numerous waves of anti-foreigner unrest have broken out in South Africa in recent years, with immigrants becoming a target due to accusations that they are taking up scarce jobs. Most recently, 12 people were killed and hundreds forced to flee their homes during a wave of xenophobic unrest in September -- see this report by AFP.

The Daily Mail attributes the image to the European Pressphoto Agency (EPA),  an international news photo agency. To confirm its origin, we ran a search on the EPA website -- it can indeed be found here. According to the metadata, the image was captured on February 24, 2017.

A reverse image search on Google led us to a BBC news report from India which bears a resemblance to the story of the “Soweto father”. It details the case of a father in Delhi who tortured and killed his tenant in 2014 after suspecting him of raping his daughter. He turned himself into police voluntarily.