This video shows the funeral of former Nigerian leader Yar’Adua – not President Buhari, who is alive

A video showing a body wrapped in a Nigerian flag and carried by military officers through a crowd has been shared thousands of times online, with claims that it documents the funeral of Nigerian President Muhammadu Buhari. This is false; the footage comes from an Associated Press video showing the burial of former Nigerian leader Umar Musa Yar’Adua, who died in May 2010.

Shared more than 27,000 times on Facebook and archived here, the video shows mourners gathered around the grave of a person who seems to be prominent, given the military presence and large crowd.

The narrator claims it shows Buhari’s burial and repeats an old conspiracy theory popular with followers of a separatist group according to which the Nigerian president died, was buried in his home state and then replaced by a body-double. 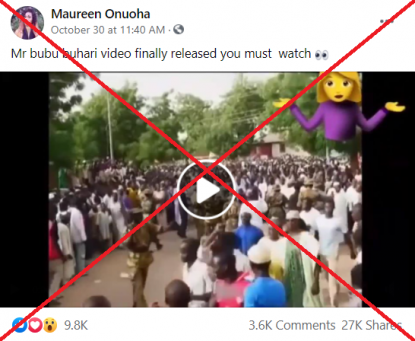 A screenshot taken on November 10, 2020 showing the false post

Speaking in pidgin English, one of the most popular languages in Nigeria, the narrator claims that a journalist, who she says pleaded anonymity, recorded the video and shared it to show that Buhari had died.

She goes on to allege that a portion of the video showing images of the president’s wife Aisha Buhari and their daughters implied that Nigeria's leader had died and his family was praying for him.

“Another great evidence is in the picture; in their culture, when the woman wears white and the children wear black to pray, it is for the funeral of the man,” says the narrator. 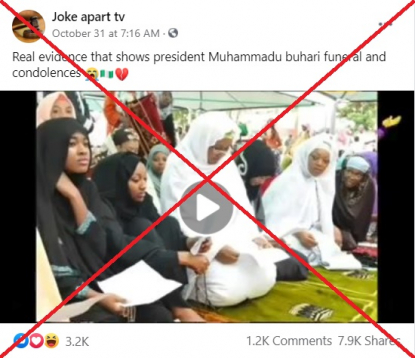 A screenshot taken on November 10, 2020 showing a picture of Aisha Buhari and her children taken out of context

AFP Fact Check ran multiple reverse image searches and found that the picture of the first lady and her daughters does not show them praying at a funeral. It is a photo taken by the News Agency of Nigeria (NAN) showing them praying at the Ansar-Ud-Deen mosque in Abuja during Eid al-Fitr in July 2015. 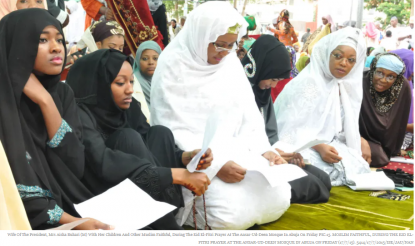 A screenshot taken on November 11, 2020, showing the original picture and caption dated 2015

The picture was simply spliced into footage of a funeral to buttress the false claim that the scene showed Buhari’s burial.

To find the origin of the funeral footage, AFP Fact Check first identified key figures in the crowd, like Mohammed Abacha, son of late Nigerian dictator Sani Abacha. We then searched for instances where the younger Abacha was filmed attending a funeral. 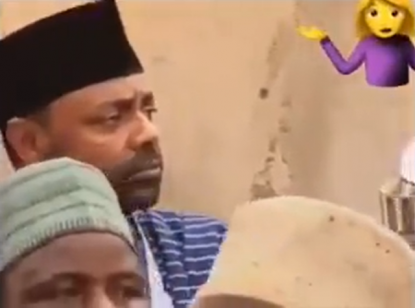 Using keyword searches, AFP Fact Check traced the footage to the archives of the Associated Press (AP). It was uploaded to the agency’s YouTube channel in June 2015, with the description of the video indicating that it was filmed back in May 2010.

Yar’Adua served as president of Nigeria from 2007 to 2010. Katsina also happens to be Buhari’s home state. 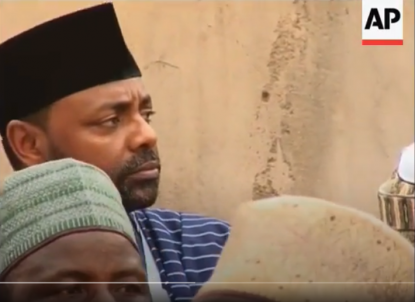 Screenshot from the original Associated Press video. The AP logo on the top right of the footage was hidden by an emoji in the version shared in the false Facebook post

The caption on one of these AFP photos describes the scene: “Senior military officers and a detachment of the brigade of guards pay their last respects to late Nigerian President Umaru Musa Yar’Adua before his burial at the cemetery in Katsina on May 6, 2010”. 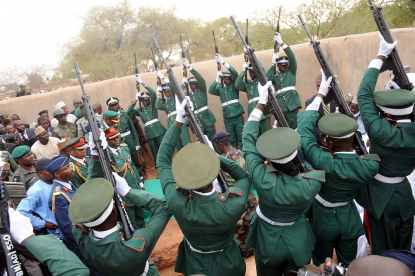 Yar’Adua died aged 58 on May 5, 2010, at his official residence in the capital Abuja after a protracted illness that kept him out of the country for months. He was Nigeria’s fourth leader but the first elected president to die in office.

You can read AFP’s report about his death here.