A document shared dozens of times on Facebook purports to show a witness statement from Kenyan lawyer Paul Gicheru, who handed himself in to face accusations at the International Criminal Court (ICC) of bribing witnesses in a botched case against Kenyan Deputy President William Ruto. However, this document is not genuine. The ICC, which has not published any witness statement in this case, confirmed it was fake.

A document using the ICC’s letterhead was posted on Facebook on November 3, 2020, just a day after Gicheru turned himself in. It is titled: “Witness statement, Paul Gicheru, taken at the International Criminal Court at 02-11-2020 18:05 HRS”.

The caption on the Facebook post reads: “Lawyer Paul Gicheru who surrendered to the International Criminal Court yesterday has finally released an ICC witness statement in which he claims that his life is in danger from people within the Kenyan Republic.” 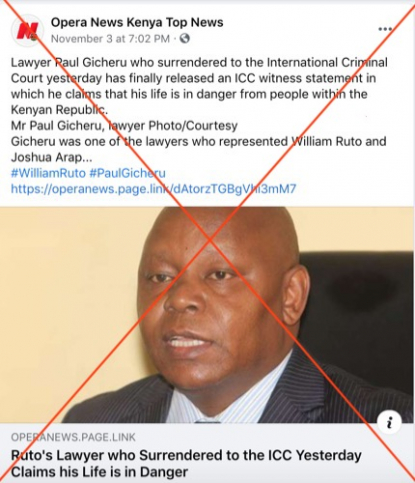 The same document was posted on Facebook here on the same day.

In the document, “Paul Gicheru” purportedly admits to bribing and influencing witnesses who were going to testify in Ruto’s trial, and claims this was under orders from the deputy president. The document also claims that his life is in “significant danger” and that he requests asylum. 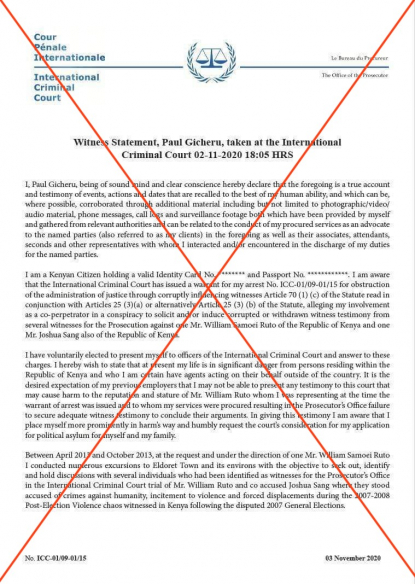 Screenshot of the fabricated document

Gicheru was wanted under a 2015 arrest warrant by the ICC for allegedly bribing several prosecution witnesses to recant their testimony in the case against Ruto.

Cases against President Uhuru Kenyatta and Ruto over post-election violence in 2007-8 collapsed in 2014 and 2016. The ICC dropped charges against Ruto and radio host Joshua Arap Sang in April 2016, with its chief prosecutor blaming a relentless campaign of victim intimidation for making a trial impossible.

The purported “witness statement” shared on social media is not genuine.

“This document is a fabrication,” ICC spokesperson Fadi El Abdallah told AFP Fact Check. “We urge caution regarding any document purporting to originate from the ICC that is not issued through one of the ICC’s official platforms or confirmed by the Court as being official.”

All official documents pertaining to Gicheru’s case are published online in the ICC’s court records, which are available here. For example, on November 2, 2020, a document was published noting that he had turned himself in. 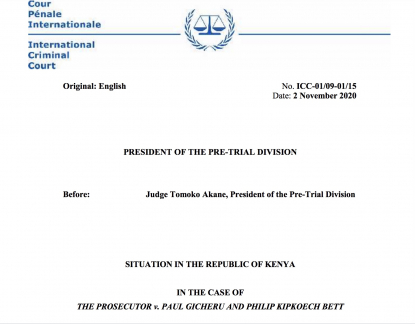 Screenshot of ICC document on Gicheru's case, taken on November 11, 2020

The ICC letterhead and the document number at the bottom of the pages were used in the fabricated document published on Facebook the following day.

The ICC has published several more official documents related to Gicheru’s case since then, but none of these are witness statements.

Gicheru made his first appearance in court on November 6, 2020, as reported by AFP. Court officials read out charges against him of “corruptly influencing” witnesses for the prosecution to recant their testimony.

“The allegations read out to me are not true, they are false,” he said, appearing by video link from the court’s detention centre due to coronavirus rules.