Social media users and online articles claim that 132,000 ballots from Georgia’s Fulton County may be ineligible, which would likely tip a state where Joe Biden is in the lead to Donald Trump. But the county’s registration and elections director described the claims as “false and baseless.”

“GEORGIA. 132,000 ‘Change of Address’ RED FLAGS in Fulton County, GA. These votes are ‘highly likely ineligible to vote and have moved,’ per source,” a November 8, 2020 tweet says. 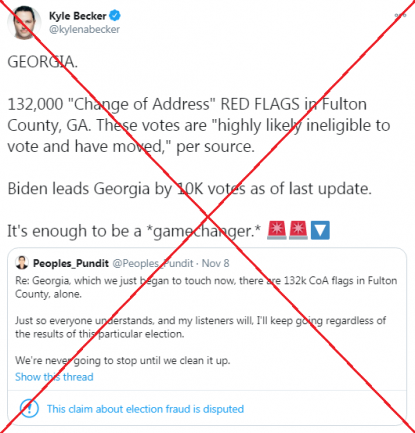 The claim also appears in this article, as well as on Facebook and Instagram. But it is false.

“Fulton County is aware of allegations of 132,000 ballots being ‘flagged.’ These claims are simply false and baseless,” the county’s Registration and Elections Director Richard Barron said in a statement emailed to AFP.

An official from the office of Georgia’s secretary of state agreed.

“They’re using a couple years old data to spew innuendo and nonsense,” the official said of those making the claim.

It is based on a comparison between an outdated list of people who have changed their addresses and the current list of registered voters in Fulton County, the official said by phone.

But there are “a million reasons” why someone could be on the change of address list and still be an eligible voter in the county, such as moving within the area, according to the official.

“There’s no evidence that these people voted... illegitimately at all.”

Trump has insisted that he is the winner of the 2020 presidential vote -- which major media organizations called for Biden on November 7 -- and has refused to concede, while making unfounded allegations of election fraud.

Biden is leading by more than 14,000 votes in Georgia -- a margin that would likely be erased if 132,000 ballots from Fulton County, which voted heavily in the Democrat's favor, were ineligible.

A screenshot showing Georgia election results as of November 11, 2020

On November 11, Georgia’s Secretary of State Brad Raffensperger said the state would conduct a recount of the presidential race due to the slim difference in votes between Biden and Trump.

AFP Fact Check has debunked a series of false and misleading claims about the 2020 election, which are available in English here.