Trump, Homeland Security did not watermark ballots in fraud sting

Social media posts claim US President Donald Trump and the Department of Homeland Security (DHS) secretly watermarked ballots to catch Democrats using fakes to win, and that the National Guard is counting the real ones. This is false; state and local authorities create and distribute ballots, DHS’s Cybersecurity and Infrastructure Security Agency said it does not design, print or audit ballots, and the National Guard said there is no truth to the claims.

“DHS Announces Election Audit Sting After Contentious US Election Sparks Confusion and Outrage From Election Skeptics,” one November 5, 2020 post says, with an added note at the top: “PAIN WILL FOLLOW!” 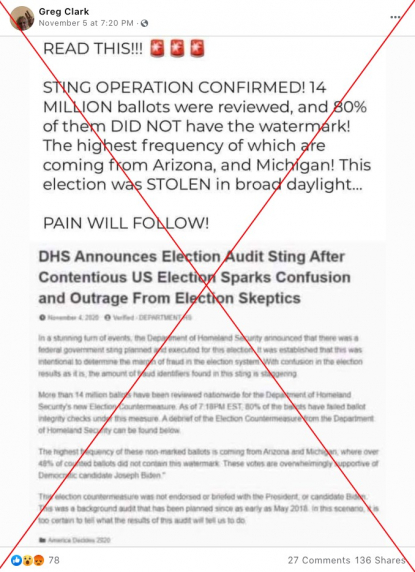 Another version of the claim refers to Trump’s supposed plot as “Operation Death Blossom.”

“Trump knew the dems planned to steal this election so he had select ballots printed with a secret, state-specific water mark in Red PMS 192… The dems were unaware and printed millions of fake ballots they would use at the last second to bail out Biden,” it says.

“Now, the National Guard has been deployed to the 12 seed states carrying the marked docs to count only the official ballots.” “The flies sailed right into the trap,” says the post, more examples of which can be seen here and here.

Still others -- like this post -- claim a secret intelligence official code-named “Q” -- who supposedly informs followers of the QAnon conspiracy theory about Trump’s struggle against a cabal of Satan-worshipping pedophiles who control the “deep state” -- long hinted at the plan by telling followers to “watch the water.”

QAnon has shifted from the US political fringe into the global mainstream during the Covid-19 pandemic, and one promoter of the theory won a Congressional seat in the November 3 election.

“REMEMBER WHEN Q SAID, WATCH THE WATER??? All LEGAL ballots bear a watermark (Dems were unaware)!!! The National Guard is recounting at this moment! Things are about to get INTERESTING!” a November 4 post reads. But the claims are false. The US Constitution holds that the states, not federal agencies or the president himself, have the power to oversee federal elections.

Article I, section 4 reads: “The Times, Places and Manner of holding Elections for Senators and Representatives, shall be prescribed in each State by the Legislature thereof,” adding that Congress can change such rules.

The Cybersecurity and Infrastructure Security Agency, housed under Homeland Security, addressed the watermark rumors on its website.

“Rumor: DHS or CISA printed paper ballots with security measures and is auditing results as a countermeasure against ballot counterfeiting,” the site reads. “Reality: The Department of Homeland Security (DHS) and the Cybersecurity and Infrastructure Security Agency (CISA) do not design or audit ballots, which are processes managed by state and local election officials.”

The website adds: “Local election offices have security and detection measures in place that make it highly difficult to commit fraud through counterfeit ballots.” National Guard Bureau spokesman Wayne Hall also addressed the claims: “There’s no truth to this at all.”

“Elections are managed at the state level, not by the federal government,” he told AFP by phone.

On November 7, media organizations across the nation called the presidential election in favor of Democratic candidate Joe Biden, who earned 290 electoral votes to Trump’s 217.

The president has so far refused to concede the election, despite calls from world leaders congratulating former vice president Biden on the win. Trump has repeatedly claimed, without providing evidence, that he actually won and the election was illegally stolen from him.

The Trump administration has filed or threatened several lawsuits over supposed irregularities, none of which has had any major effect.