Hours after US television networks unanimously called the presidential election in Joe Biden’s favor, Donald Trump maintained it was he who had won, citing a falsely-inflated number of votes and suggesting that he was a victim of foul play. 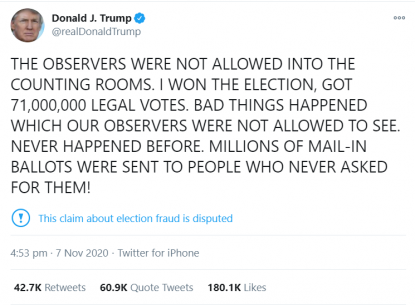 Screenshot of a Donald Trump tweet taken on November 7, 2020

Vote counting is ongoing in several states because the large number of mail-in ballots cast this year due to the coronavirus pandemic were not allowed to be processed until election day.

At the time he tweeted, Trump had a little over 70.5 million votes, not 71 million, according to numerous US media organizations who use the official Associated Press count, whereas Biden, a former vice president, had more than 74.9 million.

TV networks called the race after latest figures put Biden over the top in the key battlegrounds of Pennsylvania and Nevada. Those projected wins gave him an irreversible advantage of 279 electoral college votes, crossing the winning line of 270 seats, compared to Trump’s 214.

Trump remains in a close fight with Biden in Arizona and Georgia, where the count has dragged on since November 3’s election day, but he has no path to victory.

Since the day after the election, Trump has sought to distinguish “legal” votes from “illegal” votes, with his campaign team launching lawsuits in several states. No substantive evidence has yet been presented and no court has backed their complaints.

The president has long railed against mail-in voting, falsely insisting it is rife with fraud. US and international observers said the November 3 poll had been well conducted and no state officials have cited any reports of fraud being committed.

The president’s tweets have confused matters further, calling for vote counts, largely of mail-in ballots, to be stopped in states where he had lost leads but insisting they continue in places where he still has a statistical chance of victory.

Screenshot of a Donald Trump tweet taken on November 7, 2020

“71,000,000 Legal Votes. The most EVER for a sitting President!,” Trump tweeted, after returning to the White House from a golf course he owns in Virginia.

He had started November 7 by sending four tweets about the election outcome, all of which were labeled by Twitter as potentially misleading, and in breach of its civic process policies.

But Trump's refusal to concede threatens to plunge the United States into a prolonged period of political turmoil.