A video that shows police detaining a woman on a street has been viewed tens of thousands of times in multiple posts on Facebook, Twitter, YouTube and online forums alongside a claim she was arrested for not wearing a mask during the coronavirus pandemic in Singapore. The video, however, has been shared in a misleading context; it has circulated online in reports since October 2020 about a woman who was arrested for allegedly assaulting a stranger in Singapore. 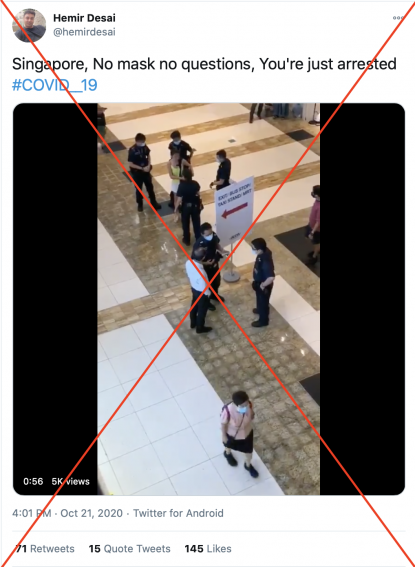 A screenshot, taken on November 5, 2020, of the misleading post.

A reverse image search of keyframes extracted from the video found this October 14, 2020 report by Singapore-based news outlet TODAY, that includes a screenshot of the same video. Screenshot, taken on November 9, 2020, of the news report by Today Online.

The article is headlined: “Woman arrested after she allegedly poured soup on stranger, spat at him and bit his arm”.

It reads, in part: “A 35-year-old woman was arrested by police officers at Novena Square mall after she poured soup over a random stranger’s head and scuffled with him, the police said in a statement on Wednesday (Oct 14).

“She was assessed to be posing a danger to herself and the public, and was then apprehended. The woman is now receiving treatment at the Institute of Mental Health.”

Below is a screenshot comparison of the video in the misleading post (L) and the TODAY photo (R):

A screenshot comparison of the misleading post and Today Online’s screenshot.

The incident was also reported by several Singapore-based news outlets, including the Asia One news website here and Straits Times’ citizen journalism website here in October 2020.