This video shows a deadly fire in India, not the recent anti-foreigner protests in South Africa

A video of people frantically jumping out of a burning building is being widely shared on social media alongside captions claiming that it shows this week’s deadly anti-foreigner violence in South Africa. But the video is not from South Africa at all -- this fire, which killed 20 teenagers, happened in India several months ago.

One Facebook post, which we’ve archived here, posts the video alongside a caption reading: "I am leaving South Africa, please don't call me while away, I will call you. The following image are graphics and not suitable for sensitive views. This video is hidden and you can uncover it on your own peril. Situation at Jo'burg CBD Be warned..” 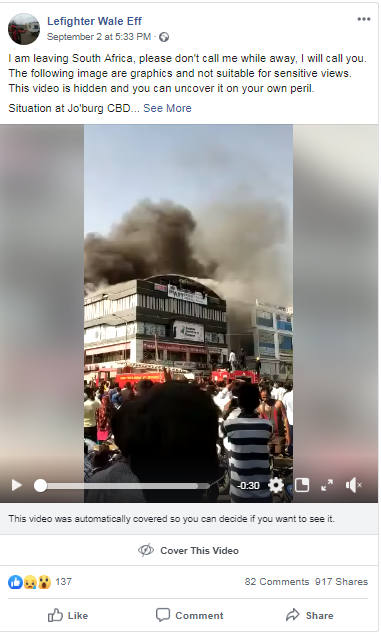 Some comments on the post drew on clues from the signage on the building and the appearance of people in the crowd to suggest that it appeared to have been filmed in India, not South Africa.

They were correct. AFP reported on the horrific fire in the western Indian city of Surat, in the state of Gujarat, in May. Twenty teenagers died in the blaze, some of them while jumping from the building in a bid to escape the flames.

AFP’s Fact Check team in India showed us many local news reports about the fire from May, including this video which shows a building recognisable as that seen in the misleading posts locating it in South Africa.

A close look at the buildings in both videos shows that the signage matches: one sign reads “ART” and another reads “CREATOR INSTITUTE FOR DESIGN”. 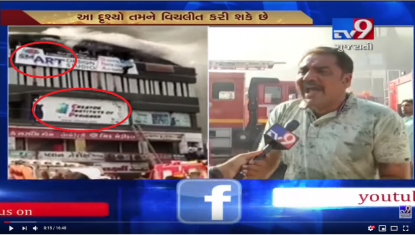 ... and the same signage clearly visible in the Indian news report from May 2019

As reported by AFP, South Africa and Nigeria stepped security on Wednesday after deadly attacks on foreign-owned stores in Johannesburg triggered reprisal assaults on South African businesses in Nigerian cities.

Seven people have been killed and at least 289 have been arrested since the violence flared in South Africa over the weekend. There have been repeated waves of such violence in South Africa in recent years, as tensions over immigrants from other African countries -- blamed for taking up scarce jobs -- have spilled over.

Earlier in the week, Police Minister Bheki Cele told journalists after a tour of the Johannesburg central business district that the recent violence was linked to "criminality" rather than "xenophobia", implying that the tensions over immigration were being used as an excuse by people who just wanted to loot shops.

"For now there is nothing that has sparked any form of this conflict between the South Africans and foreign nationals," he added.

On Twitter, many people have expressed their anger and disappointment at the violence under the hashtag #SayNoToXenophobia.

Dear South African's let's all remember @RealBlackCoffee n ubaba Hugh Masekela's words that "We are one", black on black crime is a definite No No #SayNoToXenophobia

Goosebumps! Goosebumps! This is what our brothers are faced with. Abandoned by their government, hated all over the world, they just want to put food on their tables, and they have to face this. This is sad but I’m proud of them! Can you hear the chant? IGBOS! #SayNoToXenophobia pic.twitter.com/uUDBGKagud

Social media across the continent has been abuzz, but some of the most widely shared images and videos are misleading -- either because they were taken years ago, or because, like this Indian video, they don’t show xenophobic violence in South Africa at all.

We’ve debunked several misleading posts that have been spreading online over the past few days, including this one about a South African telecommunications firm getting torched in Lagos, Nigeria, and old comments from a former South African minister here.