Social media users including Femi Fani-Kayode, Nigeria’s former minister of aviation, have shared a video which supposedly shows a South African government minister complaining that immigration has grown out of control. Posting the video on September 3, 2019, just as a wave of deadly xenophobic violence was gripping South Africa, Fani-Kayode accused the politician in the video of “subtly trying to justify the killing of Nigerians”. In fact, this video was filmed back in 2017; the comments were not made in relation to the current violence. It shows Bongani Mkongi, who was South Africa’s deputy police minister at the time but has since stepped down. He is not, as claimed by Fani-Kayode, the current “South African Minister of Police Affairs”.

The video shows Mkongi complaining about the influx of immigrants to South Africa.

“How can a city in South Africa be 80 percent foreign nationals? That is dangerous,” he can be seen saying in the video.

“South Africans have surrendered their own city to the foreign nationals. The nation should discuss that particular question. You won’t find South Africans in other countries dominating a city into 80 percent,” he says. 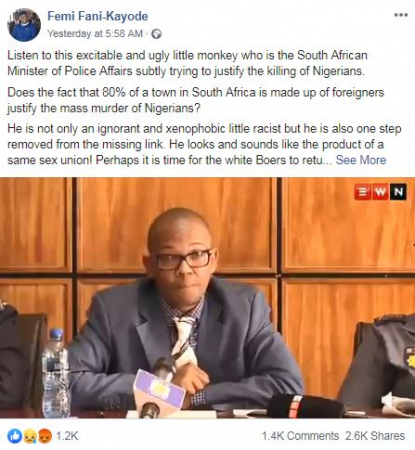 A screenshot of the video shared by Femi Fani-Kayode

Fani-Kayode posted the video on September 3, calling Mkongi “an ignorant and xenophobic little racist”. His post has been shared over 2,600 times and viewed more than 53,000 times. We’ve archived it here.

At the time of posting, as reported by AFP, the South African city of Johannesburg had been hit by a wave of deadly xenophobic unrest.

The popular Nigerian Instagram account @Instablog9ja shared the same video, racking up more than 350,000 views since September 3. “S.A’s Dep. Minister of Police justifies the attacks on foreigners,” reads the caption.

Numerous Twitter accounts have also shared the video this week, with emotions running high over the violence in South Africa.

While Fani-Kayode spoke of “the mass murder of Nigerians”, for the moment it's unknown how many Nigerians have lost their lives in the unrest of recent days in South Africa. The death toll currently stands at five, with South African nationals accounting for most of the dead, according to the government.

It’s an old video and the minister has been replaced

The video of Mkongi was in fact filmed back in July 2017 -- you can find it on YouTube uploaded two years ago:

Mkongi was South Africa’s deputy police minister at the time, but he stepped down from the role in May 2019 and was replaced by Cassel Mathale. Mkongi is no longer a serving minister and he did not make these comments in the context of the current xenophobic violence in South Africa.

In the 2017 video, Mkongi is seen talking about Hillbrow, an inner-city neighbourhood of Johannesburg. He claims that 80 percent of its residents are immigrants.

While the area is known for its large immigrant population, research by Africa Check showed that publicly available data does not support the claim, “with more and better data needed”.