This video shows a boy reciting the Koran in Zanzibar, not Indonesia's Papua region

A video has been viewed hundreds of thousands of views on multiple posts on Facebook, Instagram and YouTube, alongside a claim it shows a boy from Indonesia’s predominantly Christian region of Papua reciting the Koran. The claim is false; the video shows a boy reciting the Koran in Zanzibar.

The three-minute nine-second video was posted on December 6, 2020, on Facebook here, where it has been viewed 91,000 times.

The post's Indonesian-language caption translates to English as: “Glory be to God.. the recitation of holy verses of the Koran.. A native Papuan mountain boy Walesi district, Wamena, Papua province.. May people who share this video be blessed by God.. Amen, O God the Responder to prayer.” 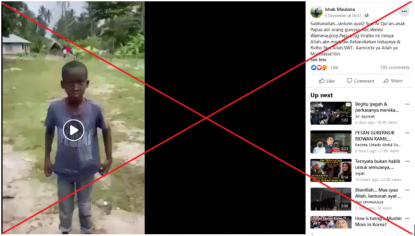 A screenshot of the misleading post, taken on December 17, 2020

Walesi is a district in Wamena regency, in Indonesia’s Papua province.

Indonesian news outlet Tribun Timur posted the video on YouTube on December 12, 2020, with a headline: “Viral, This Boy From Papua Beautifully Recites the Koran.” The clip has been viewed more than 585,000 times.

The video also appeared with a similar claim on Facebook here, here and here, and on Instagram here.

The first three paragraphs of the caption reads: “This is young Bakari from a village in Pemba Islands in Tanzania. I posted his recital recently on my YouTube channel.

“This particular verse is hair raising. The way he reads it is superb. Subhanallah. .

“It was recorded by a brother from Water Fall Charity UK, who was impressed by his recitation. The video has since gone viral.”

Water Fall, a UK-registered charity focusing on water crisis in Africa and India, posted the same video on its Instagram account on December 5, 2020. In the video caption, the organisation says, “One of our students on Pemba Island. Gone viral via @muftimenkofficial”.

Below is a screenshot comparison of the video in the misleading post (L) and Water Fall charity’s video (R):

Pemba Island is part of Zanzibar, Tanzania’s semi-autonomous Indian Ocean archipelago, where 99 percent of the population is Muslim.