The video shows a Koran reciter from Tanzania 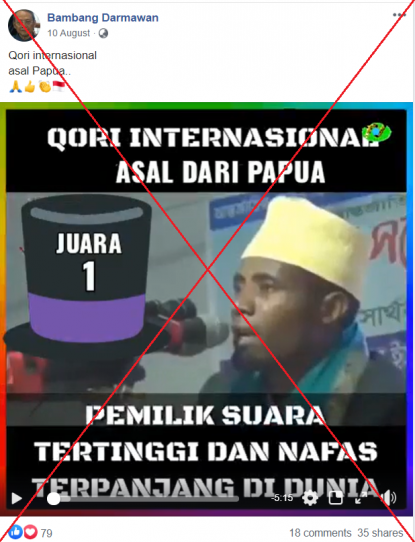 The Indonesian-language caption translates to English as: “International Koran reciter from Papua”.

The Indonesian-language text superimposed on the video reads: “INTERNATIONAL KORAN RECITER FROM PAPUA”, “HAS THE HIGHEST VOICE AND LONGEST BREATH IN THE WORLD”, as well as “FIRST WINNER”.

Papua is Indonesia’s easternmost region, comprising of Papua and West Papua provinces; Christianity is the predominant religion in both provinces.

The video has been viewed more than 10,000 times after it appeared alongside a similar claim on Facebook here, here, here and here; as well as on YouTube here and here.

Surah al Balad is the 90th chapter of the Koran.

Qari means a person who recites the Koran according to the proper rules of recitation.

Below is screenshot comparison between video in the misleading post (L) and the video on YouTube (R):

Cox Islamic Media, which is based in Bangladesh, published a similar video of Shaban reciting the Koran on December 24, 2019 here on its verified YouTube channel.

Cox Islamic Media also posted a clip on “the preparations of the 4th International Quran Conference” in Cox’s Bazar, Bangladesh, on December 21, 2019, here, and a live-stream video of the event on December 23, 2019, here.