Skip to main content
A yellow Star of David marked with the word "Jude", the German word for Jews, was a form of identification for Jewish people during the Nazi era. (AFP / Peter Rossler Family Album)

A purported screenshot of a Facebook post from Australia’s Liberal MP Karen Andrews has been shared in multiple Facebook posts claiming Andrews drew a comparison between people who are against the proposed Covid-19 vaccine and Jewish people during the Holocaust. The claim is false; the original image posted by Karen Andrews has been doctored to include the Jewish badge, a form of identification for Jewish people during the Nazi era.

The purported screenshot was published on Facebook here on September 8, 2020. 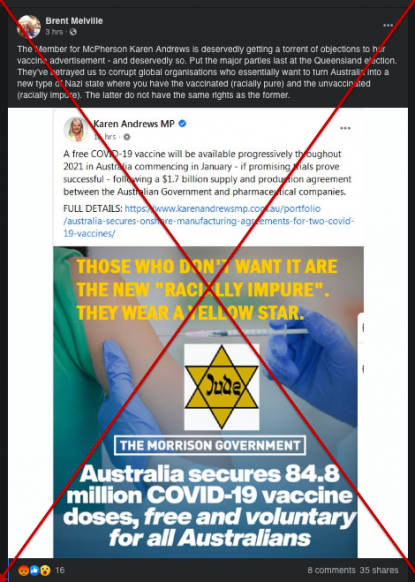 The caption of the Facebook post states: “The Member for McPherson Karen Andrews is deservedly getting a torrent of objections to her vaccine advertisement - and deservedly so. Put the major parties last at the Queensland election. They've betrayed us to corrupt global organisations who essentially want to turn Australia into a new type of Nazi state where you have the vaccinated (racially pure) and the unvaccinated (racially impure). The latter do not have the same rights as the former.”

The purported post from Andrews provided details about a planned 2021 Covid-19 vaccine scheme and additional text overlaid in the image that reads: “THOSE WHO DON'T WANT IT ARE THE NEW ‘RACIALLY IMPURE’. THEY WEAR A YELLOW STAR.”

The image features a person getting an injection and the Jewish badge, a form of identification for the Jews during the Nazi era, according to the United States Holocaust Memorial Museum.

However, the text overlaid in the image in the misleading post about anti-vaxxers being “racially impure”, as well as the Jewish badge, are not visible in Andrews’ post.

The “edit history” of Andrews' post also shows no changes made to it since its publication, as seen in the screenshot below. 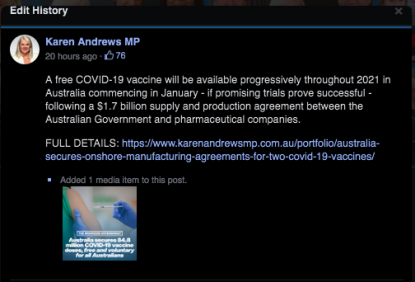 A spokesperson for Andrews told AFP in a September 8, 2020, email that the MP’s post had been doctored. “The image in question has been digitally altered,” they said.

Andrews’ spokesperson added that the image and information were part of the federal government’s campaign to promote a planned Covid-19 vaccine scheme.

The same original image was also posted to Facebook by other Liberal MPs, for example here by Greg Hunt and here by Ken O’Dowd.