Skip to main content
Syringes wand vials of the Pfizer-BioNTech Covid-19 vaccine are prepared to be administered to front-line health care workers under an emergency use authorization at a drive up vaccination site from Renown Health in Reno, Nevada on December 17, 2020. (AFP / Patrick T. Fallon)

An image has been shared tens of thousands of times in multiple posts on Twitter and Facebook alongside a claim it shows three of four clinical trial volunteers who have developed Bell's palsy after receiving doses of the Pfizer-BioNTech Covid-19 vaccine. The claim is misleading; this image has circulated online since at least January 2020, some three months before Pfizer-BioNTech began clinical trials of their vaccine in late April. While a US Food and Drug Administration (FDA) document states that four participants developed Bell's palsy during the trials, investigators found "no clear basis upon which to conclude a causal relationship" between the vaccine and the condition.

The image was published here on Twitter on December 11, 2020. It has been shared more than 300 times. 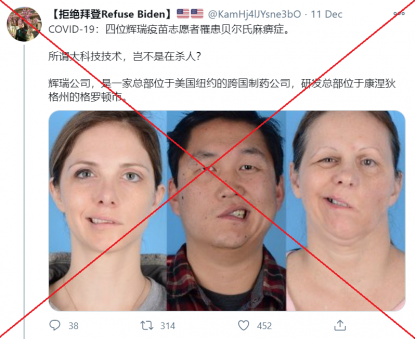 The Pfizer-BioNTech Covid-19 vaccine has been approved for use by a handful of countries around the world, including Britain and the United States, as reported by AFP.

A reverse image search on Yandex of the image in the misleading tweet found the same image in this video published on YouTube channel of Indonesian news outlet TribunnewsWIKI, on January 23, 2020.

The video’s Indonesian headline translates to English as: “Bell's Palsy - A condition where facial muscles are weakened or paralyzed”.

The description reads, in part: “Most people think Bell's Palsy is a stroke because of the similarity in the symptoms, namely paralysis. However, it’s not the reality, the two diseases are different. Bell's palsy is limited to the facial muscles and most sufferers recover completely within six months... This disease occurs when the nerves that control the facial muscles are inflamed, swollen, or compressed. Bell's palsy is caused by trauma to the seventh cranial nerve.”

The image in the misleading tweet matches the YouTube video from its three-second mark to its 51-second mark.

Below is a screenshot comparison of the image in the misleading tweet (L) and TribunnewsWIKI’s YouTube video at its three (C) and 51-second mark (R) :

The image was also shared here in an article about Bell's palsy on BMJ Best Practice, a UK based healthcare site. The article was last updated on November 20, 2019, according to the dateline.

Pfizer and BioNTech SE announced the start of their clinical trials in Germany on April 29, 2020.

The statement reads, in part: “BioNTech SE (Nasdaq: BNTX, “BioNTech” or “the Company”) and Pfizer Inc. (NYSE: PFE) have announced that the first cohort of BioNTech’s Phase 1/2 clinical trial has been dosed. Twelve study participants were dosed with vaccine candidate BNT162 in Germany since dosing began on April 23, 2020. The trial is the first clinical trial of a COVID-19 vaccine candidate in Germany. Pfizer and BioNTech plan to initiate trials for BNT162 in the United States upon regulatory approval, which is expected shortly.”

According to this December 10, 2020 FDA report, there were “four cases of Bell’s palsy in the vaccine group compared with no cases in the placebo group”, but not as a direct result of receiving the vaccine.

It goes on to state: “The observed frequency of reported Bell’s palsy in the vaccine group is consistent with the expected background rate in the general population, and there is no clear basis upon which to conclude a causal relationship at this time, but FDA will recommend surveillance for cases of Bell’s palsy with deployment of the vaccine into larger populations."