This image shows an art installation by an Australian artist

A video has been viewed hundreds of thousands of times in multiple posts on YouTube and Facebook alongside a claim that it shows a Myanmar girl turned into a dog after insulting her parents. The claim is false; the image actually shows an art installation by an Australian artist. 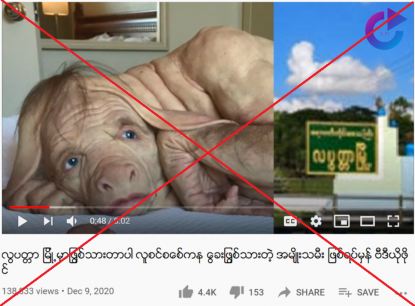 The Burmese-language title of the video translates in English as: “It happened in Labutta. The true story of a woman who turned from a real person into a dog.”

Labutta is a town located in Ayeyarwady delta region in Myanmar.

The video shows a photo collage of a humanlike creature and a town entrance sign for Labutta. A Burmese voiceover narrates the alleged story for eight minutes.

“Ma Khin Hla from Labutta who became a dog after comparing her parents to dogs,” the voiceover says.

“Her name was Ma Khin Hla and her age was about 16-17. She was a young Buddhist girl but her character is very wild and rude. She was an only child but had no respect for her parents. She was always yelling at her parents. Therefore, she had faced a very tragic event in her life.”

The voiceover goes on to state: “She complained to her parents for not cooking her dinner when they came back home from the monastery after their fasting. She called her mother ‘bitch’. Then she lost consciousness. When she regained consciousness, she no longer lived as a real person, but as a dog. Despite being human, she leaned on all fours like a dog.”

The voiceover states the event happened in 2002.

The same video was also published with a similar claim on Facebook here and here, where it has been viewed more than 1.2 million times.

A reverse Google image search found this image in a report about an art installation by Australian artist Patricia Piccinini, published by Canadian broadcaster CBC News on September 25, 2018. 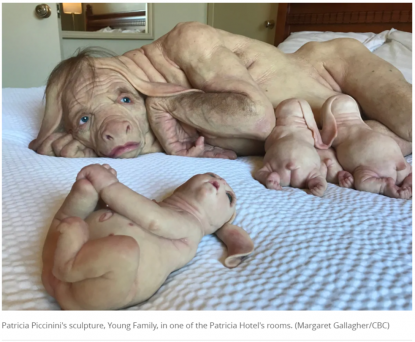 The first two paragraphs of the report read: “The Hyperrealist installation Curious Imaginings is on display in a wing of the 105-year-old Patricia Hotel in Vancouver’s Strathcona neighbourhood.

“Part of the Vancouver Biennale, some of the shocking yet fascinating sculptures of hybrid animals by Australian artist Patricia Piccinini include a humanoid beaver, a half-human/half-orangutan mother and a family of humanesque pigs.”

In response to an email from AFP, Roger Moll, studio manager for Paccinini, said the image is “a photograph of Patricia’s work, titled ‘The Young Family’.”

“Patricia does not endorse the use of unauthorised photographs of her work, especially in these kinds of ridiculous scams,” Moll told AFP by email on December 17, 2020.