Two pictures have been shared multiple times on Facebook and Instagram alongside a claim that it shows a four-eyed animal newly discovered in South Sudan. The claim is false; the pictures actually show a figurine of a Basque mythical creature made by a Spanish artist.

The photo collage was posted here on Instagram on December 9, 2020. It has since received more than 3,700 likes.

The posts contain two photos of a black goat-like creature with four eyes.

The Indonesian-language post translates to English as: “Four eyes”, while the text superimposed on the image reads: “The discovery of a new animal with 4 eyes in South Sudan, one of the beauties in Africa.” 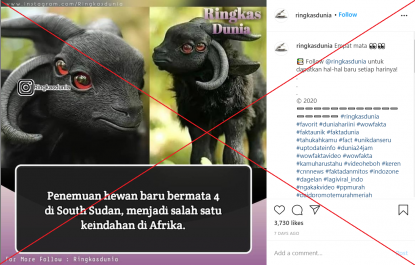 The photos were also shared on Facebook here and here, alongside a similar claim.

It was also posted with a similar claim in English, here and here.

A combined reverse image and keyword search on Google found this photo, posted here on the Instagram account of Fuego Fatuo Art, which belongs to Spanish artist Alvaro Herranz, on October 25, 2019.

The post reads: “[EN] Akerbeltz is now available for preorder at www.fuegofatuo.etsy.com! Link in bio!”

Akerbeltz, who takes the appearance of a black goat or a billy goat, is a figure in Basque mythology.

The first picture in the misleading post is the mirror version of Fuego Fatuo Art’s photo on Instagram.

Below is a screenshot comparison of the first picture in the misleading post (L) and Fuego Fatuo Art’s photo (R):

The post’s English-language caption reads: “Let me introduce you this little baby Akerbeltz. Akerbeltz is a mythical creature from Basque mythology in northern Spain. Originally considered a nature and animals protector, its link to witches and covens from the ancient ages made christian religion consider them evil creatures related with the devil. Whichever simbolism you prefer to believe in, it seems a good creature for this spooky season of the year. What do you think?”

The second photo in the misleading post is, again, the mirror version of Fuego Fatuo Art’s October 12, 2019, photo.

Below is a screenshot comparison between the second photo in the misleading post (L) and Fuego Fatuo Art’s photo (R): 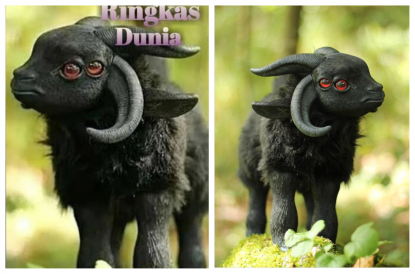 Fuego Fatuo Art also published a video reviewing the sculpture here on its YouTube channel. At the 2:30 mark of the video, Herranz, the artist, explains that he wanted to make the animal “to be more fantastical”, and so he added an extra pair of eyes and horns.