This photo has circulated online since 2013 in reports about a protest in London, not India

A photo of a man trampling on the Indian flag has been shared hundreds of times in multiple posts on Facebook alongside a claim it shows Sikh farmers desecrating the flag during protests in India over new agriculture laws. The claim, however, is false; this photo has circulated online since at least 2013 in reports about a protest in the UK.

The photo was published here on Facebook on December 6, 2020.

The post’s Hindi-language caption translates to English as: “Farmers’ protest does not mean that our national flag can be disrespected. I spit on such protests.” 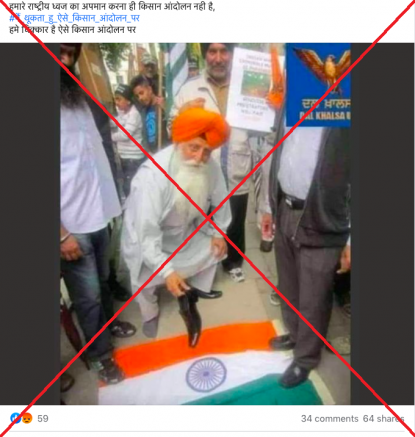 The photo circulated online as farmers in India staged nationwide protests against the country’s new farming laws, as reported here by AFP.

It was also shared here and here on Facebook alongside a similar claim.

A reverse image search on Google found the same photo published here on a blog run by the UK-based Sikh group Dal Khalsa, on August 15, 2013. 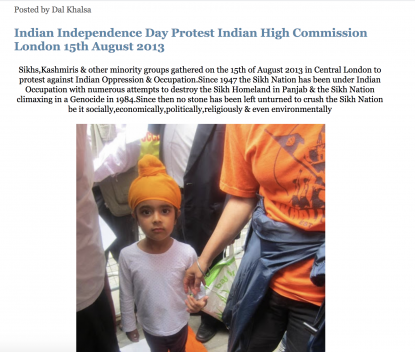 The blog post reads, in part: “Sikhs, Kashmiris & other minority groups gathered on the 15th of August 2013 in Central London to protest against Indian Oppression & Occupation.”

Below is a screenshot comparison of the photo in the misleading post (L) and Dal Khalsa’s photo (R):

The blog site also shared the image on its Facebook page here on August 17, 2013.