A video has been viewed tens of thousands of times in multiple posts on Facebook, Instagram, Twitter, YouTube and TikTok alongside a claim it shows an intact prayer mat recovered from the Indonesian submarine that sank in April 2021. The claim is false: the footage actually shows victims’ belongings recovered from an Indonesian passenger plane that crashed in January 2021.

The post’s Indonesian-language caption translates to English as: “God has willed it …. The demise of Manggala 402 leaves behind a prayer mat that is still intact, May God’s Heaven be the best place for all His people, Amen 🤲🤲🤲”.

The text superimposed on the clip reads “Subhanallah”, which means “praise be to God”. 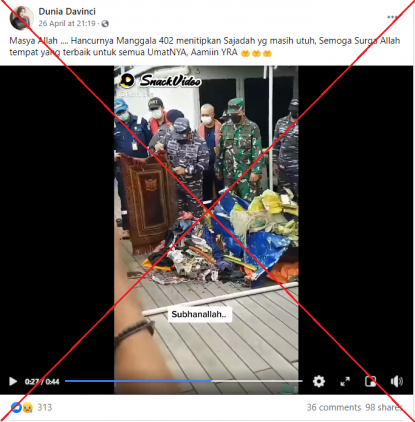 Indonesian submarine KRI Nanggala 402 sank in the waters off Bali island on April 21, 2021, killing all of its 53 crew members aboard, AFP reported.

A reverse image search on Yandex followed by subsequent keyword searches found this video taken from a different angle. It was posted by local TV station Metro TV on its official YouTube channel on January 5, 2021.

The video is titled: “Some Parts of the Sriwijaya Air SJ-182 CVR Black Box Found”.

The caption reads: “Entering the seventh day of the search, some parts of the cockpit voice recorder (CVR) black box of the Sriwijaya Air SJ-182 aircraft have been found. The parts found are the casing and the battery.”

Indonesia’s Sriwijaya Air Flight SJ 182 plunged into the sea north of Jakarta on January 9, 2021, killing all of its 62 passengers and crew onboard, AFP reported here.

Scenes seen in the 4:30 mark of the Metro TV footage, showing the inspection of victims’ belongings, match the scenes in the misleading video.

Below is a screenshot comparison between the footage in the misleading post (L) and Metro TV’s video (R): 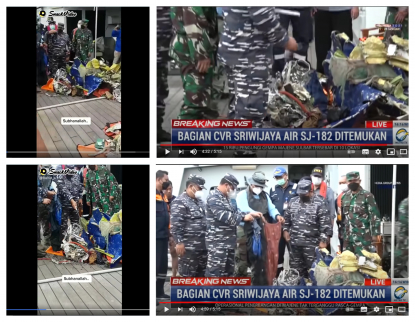 A photo by state news agency Antara showing the intact prayer mat shown by the military official was published here on January 15, 2021. It is titled: “Discovery of the CVR Memory Storage Box”.

The photo’s caption reads: “Commander of the Indonesian Navy’s First Fleet Command Rear Admiral Abdul Rasyid (seventh left) inspects debris of Sriwijaya Air flight number SJ 182 as a result of a search operation in Thousand Islands waters, Jakarta, Friday (15/1/2021). Rear Admiral Abdul Rasyid said the SAR team was still searching for the memory of the CVR because it had been separated from the underwater locator beacon.”

Below is screenshot comparison between the footage in the misleading post (L) and the Antara photo (R):

AFP has also debunked a false claim that the KRI Nanggala 402 crew members were praying on the submarine before it sank in April 2021.