An image has been shared thousands of times on Facebook, Twitter and news reports alongside a claim that it shows Indonesian sailors praying on a submarine before it sank in April 2021. The claim is false: the image has circulated in reports since at least July 2020. The photo was taken at a different submarine, the administrator of the Instagram account who posted the image says.

The photo showing crew members praying on top of a submarine was posted here on Twitter on April 24, 2021.

The Indonesian-language tweet reads: “Photo of the crew of Submarine the KRI Nanggala-402 before sailing (before the accident occurred).

“Communal prayer on top of the submarine. Presenting our incomparable serene and pride.

“Hopefully all Indonesians still can see the faces of the Indonesian navy’s heroes.” 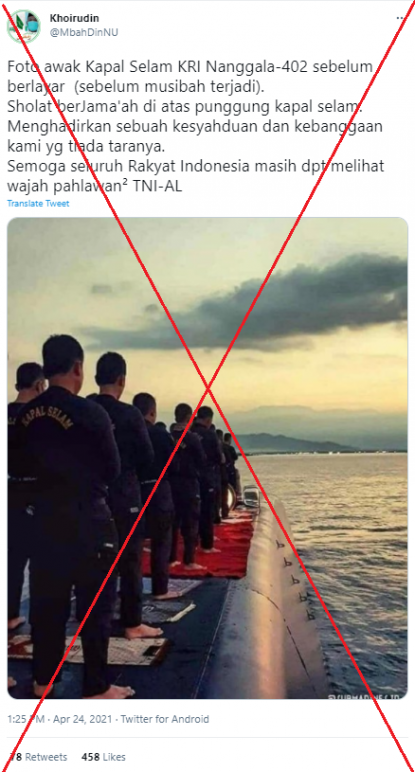 Indonesian submarine the KRI Nanggala 402 sank off the coast of Bali on April 21, 2021. All 53 crew members died, AFP reported here.

The same image alongside a similar claim has been shared thousands of times on social media, including on Facebook here, here, here and here; and on Twitter here and here. It has also appeared in news reports here and here.

A Google reverse image search found the same image has been published in media reports since at least July 2020.

Below is screenshot comparison between the image in the misleading post (L) and the picture in Okezone’s report (R): 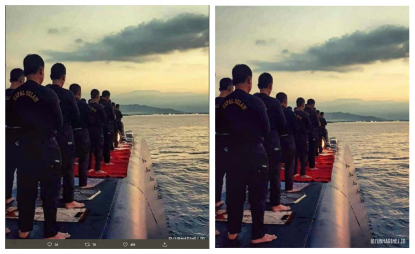 Contacted by AFP, the administrator of @submarines.id said via Instagram direct message on April 30, 2021, that the deleted picture does not show the KRI Nanggala 402.

“The prayer was conducted at the deck of the KRI ARDADEDALI 404. It was taken in July 2020,” the message said.

The KRI Ardadedali 404 is an Indonesian submarine acquired in 2018.

Other local media such as Viva.co.id and Merdeka.com also published the same picture in reports in July 2020.