Multiple posts on TikTok and Facebook have shared purported reports from two news outlets that claim China “torpedoed” an Indonesian submarine that sank in April 2021. The claim is false: online searches found no such articles published. The news outlets whose logos were misused said they had never published the purported reports. As of May 4, 2021, there were no credible reports that China “torpedoed” the submarine. The navy said it was examining whether the submarine suffered a blackout, leaving the crew unable to perform emergency measures.

A screenshot of a news article featuring CNN Indonesia’s logo appeared in this TikTok video posted on April 28, 2021. It has been viewed almost 220,000 times.

The Indonesian-language headline translates to English as: “KRI NANGGALA 402 SUBMARINE WAS TORPEDOED BY CHINA’S 093B SUBMARINE WHILE CARRYING OUT A ROUTINE PATROL IN INDONESIAN WATERS.” 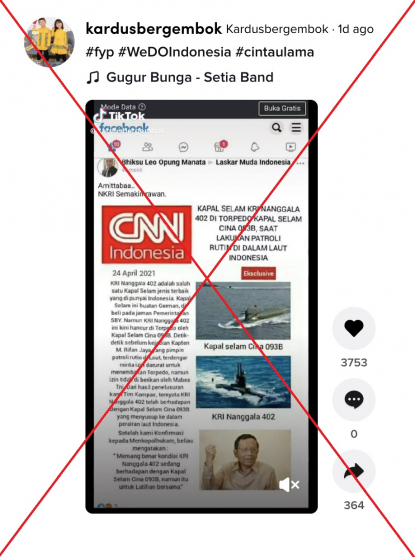 The report says in part: “But KRI Nanggala 402 is now destroyed, torpedoed by Chinese Submarine 093B ...

“Based on the investigation of us, the Kompas Team, it turned out KRI Nanggala 402 had encountered the Chinese submarine 093B, which had infiltrated the Indonesian waters.

“After we confirmed to the chief security minister, he said: ‘It is true that the KRI Nanggala 402 confronted Chinese submarine 093B, but it was for a joint exercise.’”

The Indonesian military announced on April 25, 2021, that the KRI Nanggala 402 submarine had been found more than 800 metres below the sea surface after it had been missing for four days, AFP reported here.

The vessel had broken into three pieces and all 53 crew members aboard were confirmed dead.

Another screenshot, purporting to show a report from Kompas.com, was posted on Facebook here and here.

It shows the same date of publication, paragraphs and photos as the CNN Indonesia screenshot.

Screenshot of the second misleading post, taken on May 2, 2021

The purported articles of CNN Indonesia and Kompas.com have a red label with misspelled word “Eksclusive”, instead of “Eksklusif” in Indonesian language. It translates as “Exclusive” in English.

CNN Indonesia told AFP on April 30, 2021, that they had not published the purported news report and their logo had been used “without permission”.

“CNNIndonesia.com has never published news in the context as stated in the attached picture.”

“The font type in the article is also not the Kompas.com font type. The sentences and paragraph arrangement are not the style of Kompas.com.”

A fact-check report from Kompas.com says that “the circulating screenshot, as well as the content of the article, is false or a hoax.”

An online search found no article as claimed in the screenshot images.

The military has yet to offer an official explanation for the sinking of the decades-old submarine, which was delivered to the Southeast Asian nation in 1981.

It has said, however, that the reconditioned vessel was seaworthy and discounted the possibility of an explosion.

The navy has said that the submarine may have suffered a blackout and left the crew unable to perform emergency measures. AFP reported on the investigation into the vessel’s sinking here.