A video viewed more than a million times on Facebook and YouTube claims to share “breaking news” about Philippine President Rodrigo Duterte winning a case against Beijing over the South China Sea in April 2021. But the claim is misleading: the video shows years-old news footage about maritime tensions between Manila and Beijing; no cases against China were filed or won in April 2021, the Philippines Department of Foreign Affairs told AFP.

The video has been viewed more than a hundred thousand times since it was published here on YouTube on April 22, 2021.

A portion of the video is overlaid with text that states: “CASE FILED AGAINST CHINA”. 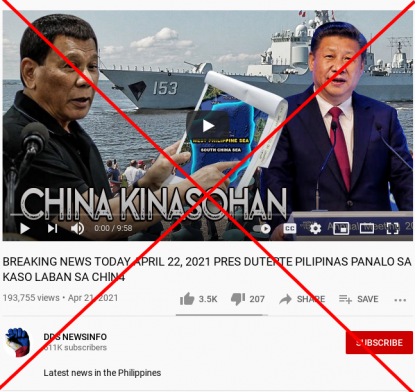 The video circulated online as tensions heightened between Manila and Beijing in April 2021 over disputed areas in the South China Sea.

President Rodrigo Duterte is facing growing domestic pressure to take a harder line, but has been reluctant to confront Beijing as he fosters closer ties with the economic giant, AFP reported here.

But these posts are misleading.

Visual clues followed by keyword searches on YouTube found the video is not “breaking news” but footage from old news reports.

The first minute of the misleading video corresponds to this news report aired by local media UNTV News on April 15, 2019.

The report states the Duterte government was not setting aside Manila’s arbitration victory in a case filed against Beijing in 2013, during the presidency of Benigno Aquino III.

The remaining portion of the video corresponds to this speech Duterte delivered on August 21, 2018 where he spoke about various topics including his relationship with his father, the 2017 siege in the southern Islamic city of Marawi, and his government’s brutal war against illegal drugs.

Below are screenshot comparisons showing frames in the misleading video (L) and their corresponding sources (R):

Ivy Banzon-Abalos, head of strategic communications at the foreign affairs department, confirmed Manila has not filed a case against Beijing in April 2021 as the misleading posts claim.

The ruling in favour of the Philippines came out on July 12, 2016, in the early days of the Duterte presidency.