Skip to main content
Demonstrators march in Montreal on May 1, 2021 against restrictions issued by the Quebec government to curb the spread of Covid-19 (AFP / Andrej Ivanov)

US protest photo again misrepresented as image of Montreal rally

Facebook posts claim a photograph shows protesters filling several blocks at a May 2021 rally in Montreal to oppose Covid-19 restrictions. This is false; the image was taken more than three years earlier in Washington, the US capital, during a march against gun violence.

“This is how it’s done in Montreal, Canada on May 1st! Yay!! Very proud to be Canadian!!” says the text of a May 2, 2021 Facebook post that includes a photo of a wide street filled with demonstrators. 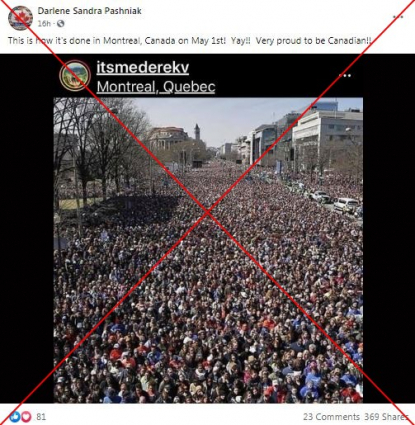 The same photo was shared on Facebook here, here and here with the claim it was taken in Montreal. It was also shared with text making the claim in French.

Montreal is under some of Canada’s most restrictive policies to curb the spread of Covid-19, including a curfew between 9:30 pm and 5:00 am. More than 10,900 people have died from the disease caused by the coronavirus in Quebec.

On May 1, 2021, the city saw a large rally with signs in the crowd expressing opposition to mask mandates, curfew and health passports.

Police declined to provide a crowd estimate to AFP, but Canadian media said it was the biggest protest against Covid-19 restrictions in Quebec in recent months.

But the photo shared on Facebook does not picture this protest.

AFP Fact Check used a Google reverse image search to determine that the photo actually shows a rally in Washington, DC in March 2018.

The photo was published by The Washington Post here with the caption, “Attendees at the March for Our Lives rally on March 24 in Washington.”

The image was also shared in January 2021 posts that falsely claimed it pictured a rally in support of then-president Donald Trump.

At that time, Georges tweeted: “I want to clarify that I took this photo on March 24, 2018 while covering the March for Our Lives event in the capital.”

Google maps makes clear the photo depicts Pennsylvania Avenue. The Canadian Embassy is on the right and the tall building in the center of the image is the Old Post Office Tower.

Here is a side-by-side comparison of the images with the buildings that appear in both circled:

This photo was also falsely said to show a March rally in Montreal.