A misleading graphic about Nigeria's global terrorism ranking, which AFP Fact Check debunked in 2020, is again causing a stir on social media. The graphic, released last September by a Nigerian TV station, showed that the nation placed third on an index of the world's most terrorised countries. But the 2020 report had not yet been released at the time and the broadcaster withdrew the graphic after admitting it was based on old data. Since then, the new index has been released, confirming that Nigeria indeed ranks third. Online users are now sharing old fact-checks about the erroneous graphic to discredit the latest ranking -- even though it is actually accurate this time. 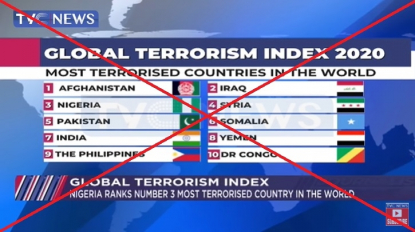 At the time, TVC’s viral graphic incorrectly relied on figures from the 2019 Global Terrorism Index and presented them as 2020 statistics.

“It was an error and it’s been corrected to reflect the correct date,” programme producer Festus Alabi had told AFP Fact Check back then.

When the channel first broadcast its graphic, the 2020 Global Terrorism Index (GTI) was yet to be released. The index is an annual publication of the Institute for Economics and Peace (IEP) that “provides a comprehensive summary of the key global trends and patterns in terrorism over the last 50 years”.

In April 2021, following reports of widespread killings and kidnappings in Nigeria, the country’s former vice president Atiku Abubakar used the same graphic in a tweet about security issues in Africa’s most populous nation.

“Yes, the challenges we face are enormous. But they are surmountable. What we need is the leadership and the will to do what is right for our country and its people,” tweeted Abubakar, who was also the 2019 presidential candidate of Nigeria’s opposition Peoples Democratic Party (PDP). 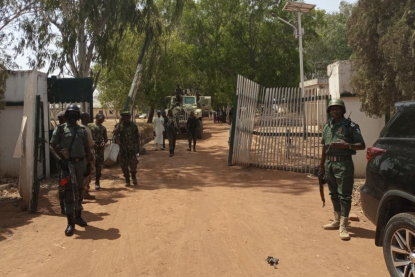 Nigeria has seen a rise in insecurity, as seen here in March 2021 when at least 30 students were abducted in Kaduna (Photo by Bosan YAKUSAK / AFP)

The politician’s tweet has since sparked debate about Nigeria’s position on the 2020 terrorism index.

“Fact Check:   No 2020 Global Terrorism Index ranked Nigeria third,” reads a Facebook post by Ayekooto Akindele, otherwise known as DeeOneAyekooto. He has a history of promoting the activities of Nigeria’s governing party and arch PDP rival, the All Progressives Congress (APC). A previous post by him was debunked by AFP Fact Check.

In fact, Nigeria ultimately did rank third in the 2020 index, which was released in November 2020 -- two months after TVC’s misleading graphic and AFP Fact Check’s debunk were published.

Furthermore, the top 10 was unchanged from the year before although the order was slightly different, with Yemen moving up to sixth from eigth place for instance.

The 2020 Global Terrorism Index revealed the impact of terrorism across the globe, including the fact that Nigeria remained in third spot, the fifth time since 2015.

According to the index, Africa's most populous nation witnessed 411 terrorism-related attacks that left more than 1,200 people dead in 2019, marking it the “lowest level of terrorist violence in Nigeria since 2011.”