Skip to main content
Medina Spirit, ridden by jockey John Velazquez (3rd from right), leads the field into the fourth turn on his way to winning the 147th running of the Kentucky Derby at Churchill Downs on May 1, 2021 in Louisville, Kentucky (AFP / Getty / Andy Lyons)

Social media posts claim that John Velazquez, the Kentucky Derby winning jockey, insulted US President Joe Biden after his recent track victory, and turned down an invitation to the White House. This is false; Velazquez’s agent confirmed the quote is fabricated and that the champion has not been extended an offer to visit the president.

“BREAKING NEWS Derby winner Medina Spirit’s jockey John Velazquez turned down a White House invite today saying ‘If I wanted to see a horse’s ass I would of came in second,’” says an May 3, 2021 Facebook post. 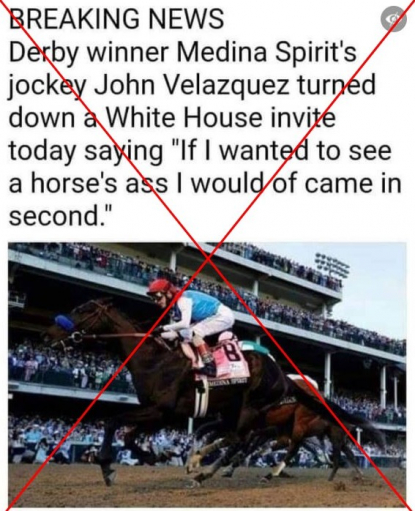 The posts circulated shortly after Medina Spirit won the 147th Kentucky Derby on May 1, 2021. It was Velazquez’s fourth victory in the landmark race.

“It’s as false as false can be,” Velazquez’s agent Ron Anderson told AFP.

“He wouldn’t say anything derogatory about anything or anybody,” he added. Anderson also confirmed that Velazquez has not been extended an invitation to the White House.

There were no such comments made in the post-race press conference and no reputable source has published this quote.

Within the comments section of some of these posts there was confusion as to whether this quote was meant as a joke or not. A meme page called ‘That’s Funny Right There’ also shared the quote and some post authors began adding disclaimers to their captions, clearly labeling the post as a joke.

Posts similar to this one have circulated before as the name of the politician is easily interchangeable.